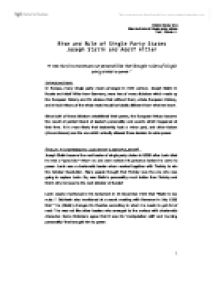 Rise and Rule of Stalin and Hitler

Rise and Rule of Single Party States Joseph Stalin and Adolf Hitler "It was the circumstances not personalities that brought rulers of single party states to power." Introduction: In Europe, many single party rulers emerged in 19th century. Joseph Stalin in Russia and Adolf Hitler from Germany, were two of many dictators which made up the European history and it's obvious that without them, whole European History, and in fact history of the whole world would be totally different from what we know. Since both of these dictators established their power, the European history became the result of perfect blend of leader's personality and events which happened at that time. It is more likely that leadership took a minor part, and other factors (circumstances) are the one which actually allowed these leaders to seize power. Stalin: A charismatic leader of a manipulator? Joseph Stalin became the next leader of single party states in USSR after Lenin died. He was a "grey blur" whom no one ever notices his presence before he came to power. Lenin was a charismatic leader whom worked together with Trotsky to win the October Revolution. Many people thought that Trotsky was the one who was going to replace Lenin. ...read more.

He meticulously thought about delaying the collectivization and the result was satisfactory: By the end of February 1930, half of peasant household had been collectivized. Thus, it can be concluded that Stalin's personality did bring him to become a dictator, but the circumstances were the 'decisive' factors which made Stalin the dictator of a single party state in USSR. Hitler: The central controller or a clever situation adaptor? Adolf Hitler has a different characteristic from Stalin. He was an Austrian, who served the German military during WWI. Different from Stalin whom had clear Marxist ideology but no clear principle, he had vague ideology of Nazism but he had clear principles in which became the fundamental base of his leadership and they way he ruled the single party state. There were anti Semitism and racial supremacy, Lebensraum, Anti-democracy, and F�hrerprinzip. Intentionalist historians argue that everything happened was a part of Hitler's 'master plan' to establish his power. He had ambitions, for sure, and he was enthusiastic and capable of achieving it. Hitler was a great leader; he was a great 'elocutionist', a great manipulator, a great organizer and a great strategist. Otto Strasser mentioned in his book, Hitler and I, in 1940 that "..and he is promptly transformed into one of the greatest speakers of the century." ...read more.

Nazism was an emotional response to a crisis happening at that time. Luck also followed Hitler on the way towards his chancellorship. The 5 years imprisonment changed to 10 months sentence, weakening of Weimar Republic, and Papen. Papen was the one who recommended Hindenburg to put Hitler in the chancellorship position. If Hindenburg sticked to his decision to make Papen as the chancellor, no matter how good Hitler's future planning was, won't have any meaning. There were also other dictators which started to gain power in Europe. Stalin-USSR, Mussolini-Italy and Franco-Spain due to WWI. His rise to power was lighted by other dictator's success which encouraged him to do the same. It's arguable that his personality played the minor part of the whole play. Conclusion: Joseph Stalin and Adolf Hitler were two of dictators in Europe. Even though they had a different background and ideology, some common links could be found in them: They had ambition and they tried their best to make the country 'better'. Their personality was one of the elements which build up the European history that we know today, but it is strongly argued that there were other factors or the circumstances which actually brought the rulers of single party states to power. ...read more.