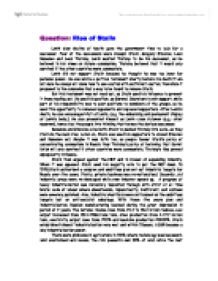 Question: Rise of Stalin Lenin slow decline of health gave the government time to look for a successor. Four of the successors were Joseph Stalin, Gregory Zinoviev, Leon Kamenev and Leon Trotsky. Lenin wanted Trotsky to be his successor, as he believed in his views on future communism. Trotsky believed that it would only survived if the other countries were communists. Lenin did not support Stalin because he thought he was too keen for personal power. He also wrote a political testament shortly before his death,"I am not sure he always will know how to use caution with sufficient caution, therefore I proposed to the comrades that a way to be found to remove Stalin. ...read more.

Maybe it was faith too, as people favour Stalin's policy of concentrating communism in Russia than Trotsky's policy of believing that Soviet Union will only survived if other countries were communists. Trotsky's idea proved unpopularity in Russia. Stalin then argued against the NEP and in favour of expanding industry. When it was opposed, Stalin used his majority vote to pull the NEP down. In 1928,Stalin authorised a complex and ambitious plan set out industrial targets for Russia over five years. Firstly, private business was re-nationalised. Secondly, old industrial areas were re-developed while new industry sprank up. A program of heavy industrialisation was forcefully implented through with strict at all time brutal code of labour where absenteeism, impunctuality, inefficient, and laziness were severely punished. ...read more.

In the end, Stalin's collectivisation caused many peasants to overwork. Stalin was in success, as the five years plan hauled USSR to the top, just second from USA in 1939, but very strict control over people's thinking. Stalin eliminated some of the most capable and brightest people in Russian government and military. Many prominent members of party were arrested and put on show trial. No one was safe as prosecutors might find themselves the next one being accused. Often, people admitted their "crimes" after tortures and family threat. Atmosphere of fear and terror was in air, and purges nearly caused Russians could not be able to cope during Germany invasion in 1941. Overall, Russia had achieved the success, as Stalin established her as a strong and powerful country in a rather short period of time. ...read more.