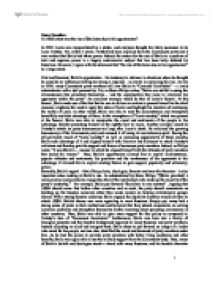 Essay Question: To what extent was the rise of Stalinism due to his opportunism? In 1922, Lenin was incapacitated by a stroke, and everyone thought his likely successor to be Leon Trotsky. Yet, within 5 years, Trotsky had been expelled from the Communist party and it was evident that Stalin had taken power. Indeed, the reason for the rise of Stalin to a position of total and supreme power is a hugely controversial subject that has been hotly debated by historians. However, I agree with the statement that "the rise of Stalinism due to his opportunism" to a large extent. First and foremost, Stalin's opportunism - his tendency to advance in situations where he thought he could do so without provoking too strong a response - is pivotal in explaining his rise. As late as 1924, many Communist party members still saw Stalin as "Comrade Card-Index" - a lowly administrator with a dull personality. Yet, as Steve Philips writes, "Stalin was skilful in using the circumstances that presented themselves... and the opportunities that arose to overcome his opponents within the party." An excellent example would be that of Lenin's funeral. At this funeral, Stalin made use of the fact that he was to deliver an oration to present himself as the chief mourner, emphasis the need to apply the ideas of Lenin and highlight his intention of continuing the works of Lenin. ...read more.

As Philips mentioned, "Many Bolsheviks wondered whether Trotsky was a man of the party or of his own agenda." To make matters worse, Trotsky did nothing to dispel the fears, but chose instead to criticise the party. This is evident from his criticisms on party bureaucracy as aforementioned as well as his attacks on Lenin's New Economic Policy in his essays Lessons on October published in 1924 after Lenin's death. Many saw this as an insult to Lenin and with the intense atmosphere of "Lenin worship", Trotsky soon lost many supporters, of whom many turned instead to Stalin who had exploited popular sentiments to his advantage. Philips further substantiates this, "[Stalin's] arrogance and aloofness, while making him unpopular with the party, also led to a lack of judgement on occasions." Trotsky's gross misjudgement of the mood after Lenin's death as mentioned above is an excellent example. Furthermore, as mentioned by Lowe, Trotsky's intellectual brilliance worked against him by arousing the envy and resentment of the Politburo leaders who united in effort to prevent Trotsky to become leader. Trotsky's arrogance led him to become alienated from a large number of party members and he did little to garner support or organise his supporters. A good evidence of his growing unpopularity is that of the outcomes of the Thirteenth Party Conference, in which few of Trotsky's members were elected. ...read more.

Through their actions, they aided Stalin in the removal of Trotsky, and allowed his growing power to grow unchecked until it was too late. In conclusion, I believe that Stalin's opportunism was the most important factor in contributing to his rise. To put it very simply, all other factors hold no water because if it was not for Stalin's opportunism, they would have had been useless. First and foremost, Stalin's appeal came primarily from the ability to exploit circumstances, attitudes and situations to his advantage. He based his main strength and focus on reflecting what the people and party members wanted, and thus raising his appeal and gaining their support. Next, Stalin's various positions as well as the prevalent attitudes, fears and overall atmosphere of feelings of the Politburo and Communist Party were again, useful only because he had the opportunism to exploit them. While no one else wanted the role of General Secretary, Stalin took it as he foresaw the useful information and powers he would acquire which others had overlooked. As aforementioned, the attitudes, fears and atmospheres he exploited to gain power on one hand and undermine the opposition's support on the other. Finally, the weaknesses of his opponents meant nothing had Stalin been unable to take advantage of them, point them out to the party and use other methods to weaken his opponents' stand in the party. Thus, all in all, it is evident that Stalin's opportunism played the most pivotal role in his rise to power. ?? ?? ?? ?? 1 ...read more.