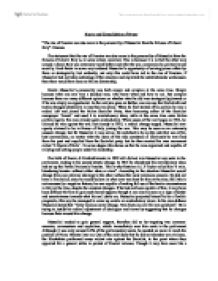 Rise to and Consolidation of Power.

This demonstrates that Mussolini was careful and did not do things without thinking it through first, though he was seen unsure whether or not to go through with the March on Rome and it reached the point in which Balbo said to Mussolini "We are going, either with you or without you. Make up your mind". This may lead to the questioning of whether Mussolini was actually a good leader or simply knew how to apply all his journalistic skills and tricks, to create the view of him being a good leader. The King eventually called Mussolini to form his own government and appointed him Prime Minister. Mussolini some way managed to make it appear as though Fascism was strong enough to smash socialism and remould society, and that it could easily disturb the functioning of parliamentary politics. In the words of Giacinto Serrati, a Socialist in the year 1919, Mussolini was "A rabbit; a phenomenal rabbit; he roars. Observers who do not know him mistake him for a lion". What he was trying to say was that Mussolini's career was a one of bullying and bluffing. He talked about positive activism and taking action, but never implemented himself, therefore he only seemed dangerous but truly was not, which got him more respect for his strength then he disserved. The failures of Liberal Italy can be traced back up to around the 1870's and the pre-war years. ...read more.

Giolitti, Bonomi and Facta ended up depending on the Fascists in a way, since they were their best weapon to fight off communism. When Mussolini threatened the King with the March on Rome, Facta tried to convince the King to declare a martial law, but the King had different concerns. Not only did he not fully count on the armies support, since many were followers of Fascism, but even if they were willing to fight there was a risk of a civil war or the army could retreat and in both cases he would be forced to abdicate. This may have probably not been the case since the March on Rome simply consisted on a few Fascists with poor weapons walking the streets, but at the time the Fascists strength had been enlarged in disproportional manners. Since the King did not know this, he preferred having Mussolini as Prime Minister then taking the risk, thus appointing him. To conclude, both Mussolini's personality and the failures of Liberal Italy led to the rise of Fascism, but it was the weaknesses of the Government since the years 1970's which gave the future government an unstable and uncertain base, then leading to many economic, social and political problems. Still it would not have enough for Fascism to rise to power, without Mussolini's ability to manipulate propaganda in such a way that Fascism was seen as such a powerful party, and distress for changing ideas at the most convenient times to gain general support. ...read more.