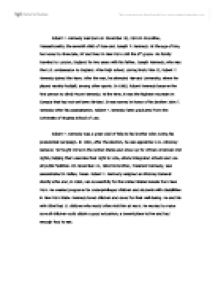 Robert F. Kennedy was born on November 20, 1925 in Brookline, Massachusetts, the seventh child of Rose and Joseph P. Kennedy. At the age of two, he moved to Riverdale, NY and lived in New York until the 6th grade. His family traveled to London, England for two years with his father, Joseph Kennedy, who was the U.S. ambassador to England. After high school, during World War II, Robert F. Kennedy joined the Navy. After the war, he attended Harvard University, where he played varsity football, among other sports. In 1965, Robert Kennedy became the first person to climb Mount Kennedy. At the time, it was the highest mountain in Canada that had not yet been climbed. ...read more.

On November 22, 1963 his brother, President Kennedy, was assassinated in Dallas, Texas. Robert F. Kennedy resigned as Attorney General shortly after and, in 1964, ran successfully for the United States Senate from New York. He created programs for underprivileged children and students with disabilities in New York State. Kennedy loved children and cared for their well-being. He and his wife Ethel had 11 children who would often visit him at work. He worked to make sure all children could obtain a good education, a decent place to live and had enough food to eat. In 1968, Robert F. ...read more.

In 2008, on the eve of the 40th anniversary of the assassination of Kennedy, the New York State Assembly voted to rename the Triborough Bridge in New York City the Robert F. Kennedy Memorial Bridge in honor of the former New York Senator. Robert F. Kennedy was not afraid to go after criminals who broke the law, especially those who hurt others or did not respect the rights of other citizens because they were of a different race. He believed all people were born with basic human rights that must be protected. "We must recognize the full human equality of all of our people. We must do it for the single and fundamental reason that it is the right thing to do." Robert F. Kennedy Day of Affirmation Address University of Capetown, South Africa June 6, 1966 ...read more.