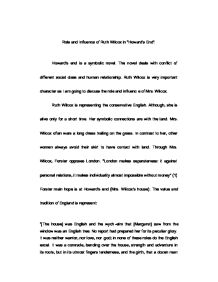 Role and Influence of Ruth Wilcox in "Howard's End". Howard's end is a symbolic novel. The novel deals with conflict of different social class and human relationship. Ruth Wilcox is very important character as I am going to discuss the role and influence of Mrs. Wilcox. Ruth Wilcox is representing the conservative English. Although, she is alive only for a short time. Her symbolic connections are with the land. Mrs. Wilcox often wars a long dress trailing on the grass. In contrast to her, other women always avoid their skirt to have contact with land. Through Mrs. Wilcox, Forster opposes London. "London makes separateness: it against personal relations, it makes individuality almost impossible without money" (1) Forster main hope is at Howard's end (Mrs. Wilcox's house). The value and tradition of England is represent: "[The house] was English and the wych-elm that [Margaret] saw from the window was an English tree. No report had prepared her for its peculiar glory. ...read more.

I had no idea that this was hanging over for you. I do pit y you from bottom of my heart. To be parted from your house, your father's house - it oughtn't to be allowed. It is worse than dying. I would rather die than- Oh poor girls! Can what they call civilization be right, if people mayn't die in the room where they were born? My dear, I am sorry" (p.79) She is not a feminist all and she said "it is wiser to leave action and discussion to men" (p.77) However, Margaret did not understand Mrs. Wilcox clearly because they just know each other. Margaret feel that is just a house in contrast to Mrs. Wilcox because when she is at Howard's end, she fell at home and its bring back memories of peace and happiness of her aristocratic childhood. Mrs. Wilcox's relationship with Margaret deals with symbolic and realistic. Symbolically, Ruth wants to give Howard's end, the goal, and the future of England to Margaret but realistically, she just impressed with Margaret's many qualities. ...read more.

There would be no trains, no ships to carry us literary people about in, no fields even."(p.164) Soon after, Margaret recognizes the Wilcox's value. Margaret also feels that Mrs. Wilcox is her guidance. As Margaret says to Helen, "I feel that you and I and Henry are only fragments of that woman's mind. She knows everything. She is everything. She is the house, and the tree that leans over it...I cannot believe that knowledge such as hers will perish with knowledge such as mine." (p.313) At this point, Margaret becomes increasingly similar to Mrs. Wilcox Howard's end cannot be left to the Wilcox's because they lack of inner life. The house is in the middle of money and culture. Ruth Wilcox wanted Margaret to be the heir but she cannot be the inheritance either. Because the real owner is the baby of Helen and Leonard Bast because the child will get idealism and passion from Helen, connect with the spirit of adventure and the ambitious in Leonard. ...read more.