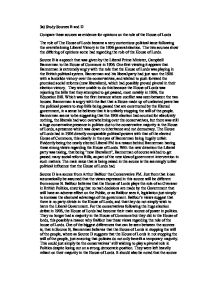 Role of the House of Lords

3a) Study Sources B and D Compare these sources as evidence for opinions on the role of the House of Lords The role of The House of Lords became a very contentious political issue following the overwhelming Liberal Victory in the 1906 general election. The two sources show the differing of opinions some had regarding the role of the House of Lords. Source B is a speech that was given by the Liberal Prime Minister, Campbell Bannerman to the House of Commons in 1906. One first viewing it appears that Bannerman is extremely angry with the role that the House of Lords was playing in the British political system. Bannerman and his liberal party had just won the 1906 with a landslide victory over the conservatives, and wished to push forward the promised social reforms (new liberalism), which had possibly proved pivotal in their election victory. They were unable to do this because the House of Lords was rejecting the bills that they attempted to get passed, most notably in 1906, the Education Bill. ...read more.

The main issue that is being raised in the source is the seemingly unfair political influence that the House of Lords had. Source D is a source from Arthur Balfour the Conservative PM. Just from that it can automatically be assumed that the views expressed in this source will be different from source B. Balfour believes that the House of Lords plays the role of an Overseer in British Politics, ensuring that no rash decisions are made by the Government that will have an adverse effect on the Public, or as Balfour sees it, legislation just simply to increase the electoral advantage of the government. Balfour's views suggest that there is no party divide in the House of Lords, and that they do not simply wish to harm the Liberal Government. For the conservatives following the huge election defeat in 1906, the House of Lords had become their main source of power in politics. They no longer had a majority in the House of Commons but they did in the House of lords, this possibly a reason why Balfour has these views regarding the role of the house of Lords. ...read more.

Bannerman, an advocate of New Liberalism, wished to get passed social reform bills when he was unable to do this he became extremely angered. His main issue was how unfair it was that the unelected hereditary House of Lords had a strong political influence over the elected government. Balfour's views disputes this, he believed that the House of Lords played the role as an overseer. His view is different, as being the conservative leader he was aware that the House of Lords was their last remaining source of power/influence as they had lost heavily in the House of Commons following the 1906 general election. Conflict was first seen between the house of commons and the Lords following the 1906, where the Liberals in earnest wished to for fill the idea of new Liberalism. The rejection of the Education Act of 1906 saw huge confrontation between the two houses. In 1909 another instance of confrontation occurred, with the rejection of DLG's "peoples budget". Confrontation ended following the reform of the house of lords in 1911, with the "Parliament Act". The Parliament Act 1911 effectively abolished the power of the House of Lords to reject legislation, or to amend in a way unacceptable to the House of Commons. ...read more.