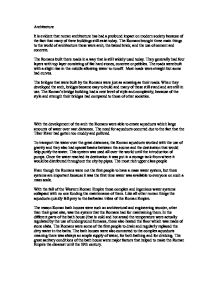 Architecture It is evident that roman architecture has had a profound impact on modern society because of the fact that many of there buildings still exist today. The Romans brought three main things to the world of architecture these were arch, the baked brick, and the use of cement and concrete. The Romans built there roads in a way that is still widely used today. They generally had four layers with top layer consisting of flat hard stones, concrete or pebbles. The roads were built with a slight rise in the middle allowing water to runoff. Most roads were straight but some had curves. The bridges that were built by the Romans were just as amazing as their roads. When they developed the arch, bridges became easy to build and many of these still stand and are still in use. The Roman's bridge building had a new level of style and complexity, because of the style and strength their bridges had compared to those of other societies. ...read more.

With the fall of the Western Roman Empire these complex and ingenious water systems collapsed with no one funding the maintenance of them. Like all other roman things the aqueducts quickly fell prey to the barbarian tribes of the Roman Empire. The reason Roman bath houses were such an architectural and engineering wonder, other than their great size, was the system that the Romans had for maintaining them. In the different parts of the bath house (that is cold and hot areas) the temperature were actually regulated by the use of underground furnaces, these also heated the floor which was made of stone slabs. The Romans were some of the first people to drain and regularly replaced the dirty water in the baths. The bath houses were also connected to the complex aqueducts meaning there was always an ample supply of water, for both bathing and for drinking. ...read more.

Most Roman monuments were constructed using an arch and had details carved into them. The arches were usually very big and were a prominent feature of the town in which it was located. The Roman style of architecture was borrowed mainly from the Greeks. The architecture of Rome did appear immediately, but came in many different stages of design and style. The first stage was the Doric stage and buildings built in this style usually had no base. Doric architecture is from before the 5th B.C. The next stage to be introduced was the Ionic and it was more complex than that of the Doric style. The next architectural style to be introduced was the Corinthian style; it began after the 5th century B.C. The Tuscan columns were the next stage to be introduced. The last stage was the Composite order that was first used in 82 AD on the arch of Titus. This stage was the most complex because it utilised the arch . ...read more.