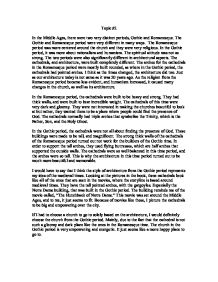 They were not interested in making the churches beautiful to look at but rather, they wanted them to be a place where people could find the presence of God. The cathedrals normally had triple arches that symbolize the Trinity, which is the Father, Son, and the Holy Ghost. In the Gothic period, the cathedrals were not all about finding the presence of God. These buildings were made to be tall, and magnificent. The strong thick walls of the cathedrals of the Romanesque period turned out not work for the builders of the Gothic time. In order to support the tall arches, they used flying buttresses, which are half arches that supported the outside walls. ...read more.

They have the tall pointed arches, with the gargoyles. Especially the Notre Dame building, that was built in the Gothic period. The building reminds me of the movie called, "The Hunchback of Notre Dame." This movie was set around the Middle Ages, and to me, it just seems to fit. Because of movies like these, I picture the cathedrals to be big and empowering over the city. If I had to choose a church to go to solely based on the architecture, I would definitely choose the church from the Gothic period. Mainly, due to the fact that the cathedral is not such a gloomy and dark place like the ones in the Romanesque time. The church in the Gothic period is very empowering and energetic. It just seems like a more happy place to go to. ...read more.