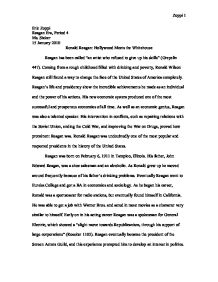 Ronald Wilson Reagan still found a way to change the face of the United States of America completely. Reagans life and presidency show the incredible achievements he made as an individual and the power of his actions.

Eric Zoppi Reagan Era, Period 4 Ms. Sieker 15 January 2010 Ronald Reagan: Hollywood Meets the Whitehouse Reagan has been called "an artist who refused to give up his skills" (Greyelin 447). Coming from a rough childhood filled with drinking and poverty, Ronald Wilson Reagan still found a way to change the face of the United States of America completely. Reagan's life and presidency show the incredible achievements he made as an individual and the power of his actions. His new economic system produced one of the most successful and prosperous economies of all time. As well as an economic genius, Reagan was also a talented speaker. His intervention in conflicts, such as repairing relations with the Soviet Union, ending the Cold War, and improving the War on Drugs, proved how prominent Reagan was. Ronald Reagan was undoubtedly one of the most popular and respected presidents in the history of the United States. Reagan was born on February 6, 1911 in Tampico, Illinois. His father, John Edward Reagan, was a shoe salesman and an alcoholic. As Ronald grew up he moved around frequently because of his father's drinking problems. ...read more.

Reagan survived the surgery, and made appearances all over the country soon after in order to keep peace and tranquility. Reagan is often given credit for ending the Cold War, something Americans were glad to escape. Martin Anderson, of the Kirkus Reviews wrote that, "Reagan played a decisive role in ending, if not winning, the Cold War" (68). As Reagan developed as a president, he used old techniques, which he employed during his two terms as governor. While Reagan focused on the important issues, his cabinet handled the smaller issues. This tactic allowed Reagan to work on the economy, major domestic issues, and foreign affairs thoroughly, in order to make better decisions for the country. This was shown when Reagan improved relations with the Soviet Union, and got Makaela Zirkhov to sign the INF Treaty, which reduced nuclear arsenals in Europe. The most remarkable part of this success was that "Reagan's voice was the guiding intelligence behind his administration's strategy for besting the Soviets" (Anderson 68). Reagan showed characteristics of natural born leader. Reagan sent 800 Marines to Grenada in order to help ensure peace, but in a turn of events 241 Marines were killed by a car bomb. ...read more.

Reagan's statement showed that he was keeping the poor in mind when he was signing bills. Another flaw critics found was the debt accumulated from Reaganomics. Although the people were making money from Reagan's economy, the government deficit grew to $4 trillion. The biggest criticism of Reagan was the problems associated with the Iran-Contra Conflict, where Reagan tried to deal with terrorists to get American hostages freed. Reagan ended his second term in 1988 and fully supported his vice president, George Bush. With Reagan's support, Bush easily beat his Democratic opponent. The Times wrote that Bush won the election "because of Reagan's popularity among the United States," showing how influential Reagan still was (Britannica). As Reagan grew older, he began to become slower than normal. After Reagan was diagnosed with Alzheimer's, his popularity did not die down. The public saw Reagan as a hero. Overall Ronald Reagan was one of the most popular and influential presidents in the history of the United States. Reagan will always be known as "the man who helped 'win' the Cold War and restored the country's confidence in itself and a better tomorrow" (Britannica). ...read more.