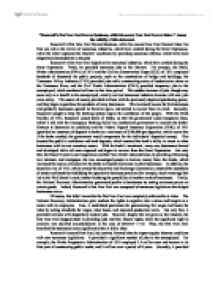 In addition, the Securities Act of 1933, which created the Securities and Exchange Commission, ensured the soundness of stocks and bonds by forbidding the speculative business practices (for example, stock-watering) that led to the Wall Street's crash, further hindering the possibility of another crash of businesses. Finally, the National Recovery Administration guaranteed profits to businesses by setting minimum prices on certain goods. Indeed, Roosevelt's first New Deal was composed of numerous legislatives that helped businesses revive. Of course, that didn't mean that the first New Deal was completely unfavorable to labor. The National Recovery Administration gave workers the rights to organize into a union and bargain as a union with its employers. Also, it established provisions for guaranteeing fair wages and hours for labor by setting standards for wages, labor hours, and expected production levels. Not only that, it provided millions with desperately needed jobs. However, despite the aid given to the laborers, the first New Deal stopped short at providing jobs and few laborer rights, while the significant right to unionize was declared unconstitutional in the case of Schecter v US. ...read more.

Furthermore, the act prohibited the employment of those under the age of 16, which was a demand by pro-laborers in the past. Finally, the second New Deal guaranteed financial assistance to the laborers. The Social Security Act of 1935 provided federal insurance, or simply monthly federal payments, to retired laborers over the age of 65, unemployed, physically disabled, dependent children and their mothers. Also, the Resettlement Administration was established under Roosevelt with the goal of resettling landless farmers to lands of better quality, providing loans to sharecroppers, tenants, and small farmers, and establishing numerous federal camps, in which destitute migrant workers could be housed in decent conditions. Overall, it could be observed that Roosevelt's second New Deal granted the laborers new rights, which further improved their conditions, thus favoring labor. It is not a surprise that Roosevelt was able to gain extreme popularity with his New Deal program because he benefited both labor and business under the common objective of relieving the nation after the Great Depression: he revived the crashed businesses and granted new rights to the laborers, which improved their conditions. ?? ?? ?? ?? ...read more.