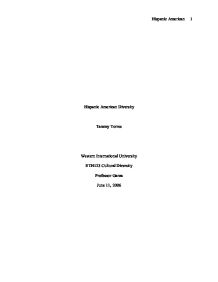 Hispanic American Diversity Tammy Torres Western International University ETH123 Cultural Diversity Professor Garza June 11, 2006 Hispanic American Diversity Many people are unaware of the population surrounding them in the United States today. There is very large Hispanic population in the United States living in America. According to the United States Census Bureau of 2002 the Hispanic population was 66.9 percent Mexican, 14.3 percent Central and South American, 8.6 percent Puerto Rican, 6.5 percent Other Hispanic and 3.7 percent Cuban. It is not uncommon to walk down the streets of an American city today and hear Spanish spoken. In 1950 fewer than 4 million U.S. residents were from Spanish-speaking countries. Today that number is about 27 million. About 50 percent of Hispanics in the United States have origins in Mexico. The other 50 percent come from a variety of countries, including El Salvador, the Dominican Republic, and Colombia. Thirty-six percent of the Hispanics in the United States live in California. Several other states have large Hispanic populations, including Texas, New York, Illinois, and Florida, where hundreds of thousands of Cubans fleeing the Castro regime have settled. There are so many Cuban Americans in Miami that the Miami Herald, the city's largest newspaper, publishes separate editions in English and Spanish. ...read more.

There are many publications that cater to the Spanish speaking communities among us. With these tools slowly the Hispanic American are developing a common identity. Hispanics from different countries are working together to achieve the same goals. One prime example of this would be the immigration protests that were held during March, April and May of 2006. Hispanics from different countries merged together as one for the same cause and voiced their opinions all for the same cause. This political cause was very important to all Hispanics. Mexicans, Cubans, Central and South Americans all came together to fight for the rights of legalization. Legalization is very important for immigrants here in the United States. Without legalization it is almost impossible to achieve economic stability. All Hispanics have the same political and economic challenges that come with legalization. With the exception of Puerto Ricans they are not subjected to the same political and economic challenges because Puerto Rico is considered to be part of the Unites States of America. Puerto Ricans do not have to gain immigration status to considered Americans. Mexicans, Cubans, Central and Southern Americans have much bureaucracy to face to have the same rights as Americans. ...read more.

Certain things that are part of the family bond will make these children feel like outsiders. But there are a certain set of values in the Hispanic community that sets us apart. Family is by far is the most valued part of any Hispanic's life. Beginning with growing up, as a young Hispanic, we do not look forward to the life ahead of us with thoughts of ourselves outside the family. We are not independent of the family unit. To the contrary, what are you without your family? To another race you are yourself, to the Hispanic, you are nothing. Everything you go through as you are growing up is shared with some member of the family. Children grow up hanging out with their brothers, sisters, and cousins as friends. There is no need to go out by yourself and leave the younger ones at home as if they are a burden. Of course there are the times when you spend alone, but most of the time you spend it enjoying company of your family. (Cuevas, 2006) Needless to say there is so much that Non-Hispanic Americans do not know about the Hispanic communities that surround them. It is very important to know about these individuals and maybe a lot that can be learned from them as well. ...read more.