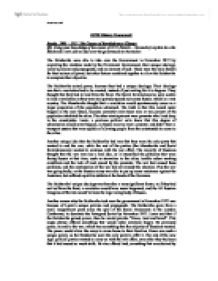 Russia, 1905 - 1917, The Causes of Revolutionary Change. Using your knowledge of the events of 1917 (March - November) explain how the Bolsheviks were able to take over the government in November.

GCSE History Coursework Russia, 1905 - 1917, The Causes of Revolutionary Change Q3. Using your knowledge of the events of 1917 (March - November) explain how the Bolsheviks were able to take over the government in November. The Bolsheviks were able to take over the Government in November 1917 by exploiting the mistakes made by the Provisional Government, their unique ideology, Lenin's policies and propaganda, and an element of luck. These were the main factors for their seizure of power, but other factors combined together to allow the Bolsheviks to complete their objective. The Bolsheviks seized power, because they had a unique ideology. Their ideology was that a revolution had to be created, instead of just waiting for it to happen. They thought that they had to lead from the front. The Social Revolutionaries were unable to lead a revolution as they were too sparsely spread out across Russia, which is a vast country. The Mensheviks thought that a revolution would spontaneously occur as a larger proportion of the population urbanised. The truth is that this would never happen in the near future, because currently only about nine or ten percent of the population inhabited the cities. ...read more.

On the 27th of August Kornilov marches his troops from the front towards Petrograd. When Kornilov's troops reach Petrograd, army discipline collapses and they abandon Kornilov to join the Red Guard. Now the Red Guard has the weapons of Petrograd, and an extended army due to the mutineers. The Provisional Government had made a huge mistake. They had given not only some, but all the weapons of Petrograd to the Red Guard leaving themselves defenceless. After Lenin had control of weapons, which were supplied to him by the Provisional Government, and an army that had rapidly gained support from the public and mutineers. He now had all the correct tools, which he needed for a job that he had masterminded: to take control of Russia legitimately. Now, he had time on his side, so he waited for the correct time to take control. The day he took control finally fell on the 6th November 1917, because that was the day before the All Russian Congress of Soviets was to meet. Due to his impeccable timing, he was able to take control before this meeting, which was to decide the fate of the Russian political system; therefore he was able to claim legitimacy. ...read more.

The Bolsheviks' unique ideology was that they should end the war, while the rest of the newly formed political parties wanted to carry on with the war effort for the same reasons as the Provisional Government did, and that was because they didn't want to be seen as cowards. The Bolsheviks knew what the people wanted, and stimulated them accordingly with the use of some crowd-pleasing policies and propaganda. The Bolsheviks' leader Lenin's astute timing of the day to seize power, the day prior to the meeting of the All Russian Congress of Soviets. Luck did have a part to play in this seizure of power, and without it, the All Russian Congress of Soviets would probably have become the legitimate controlling body of Russia, but circumstances played into the hands of the Bolsheviks. The aggressive political tactics of the Bolsheviks: the idea that you had to go out and create a revolution did eventually pay off, as if they had done what the Mensheviks had done, then the revolution would never have taken place, and Russia would be ruled by another body. The prime reason for success was the masterminding and swaying of public thought, courtesy of the Bolshevik leader, Lenin. Pratik Vats 10T ...read more.