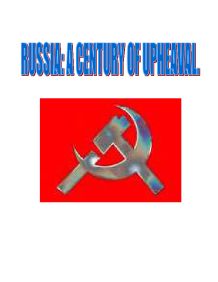 Russia: a Century of Upheaval.

Question 1 Picture this: the largest country in the world, the stretching plain, a land with important mountain ranges, a land that covers a sixth of the globe... This is Russia, a proud nation, with a rich and varied history, a nation that has, after years of isolationism we usually attribute to the USA, come out and taken its place as a capitalist power in the East and the West, yet, despite the social and political upheaval Russia has seen over the years, has anything really changed. It is true that a capitalist country is by no means always a democracy, but why is it that Russia, despite some huge political changes, is still viewed with a suspicion and scepticism that is usually reserved for the 'republics' of the Middle East, and the Backward, Stalinist regime of North Korea? Maybe it is because people remember what Nation inspired the north Koreans, what Nations leaders have become shining examples to the jumped up dictators of the modern world. The new world faces many problems, and many of them can be linked to the huge conflicts of this century, ahh, I hear you say, at last you know what I'm on about, the first and second world wars. Well yes, but there is another, more recent conflict, a hidden one, that has by no means seen as many deaths, but has arguably done more to mess up this world than the others put together. To truly understand we have to come back to the centre of this study, Russia, look at its history, and the way in which the relationship it has with the west is still changing today. Imperial Russia, to the south mountains and deserts divide it from Asia, and most of the 'advanced' nations of the west are seen as hostile. It is partly because the Russians have always been surrounded by possible enemies that they have tried to make their vast county even bigger. ...read more.

But why did the Bolsheviks succeed? After all, they were a tiny group, when Lenin stood up at the National congress of soviets, and stated that there was one party ready to lead Russia he was laughed at. Yet still, despite there apparent insignificance they managed to take control of the largest country in the world. How did they do it? First of all the Bolsheviks never worked with other parties, this decreased the chance of their aims being muddled up. They also started to round up the support of many of the common Russians, with slogans like 'peace!' 'Bread' and 'land'. Some have remarked that Hitler's own campaign slogans were worryingly similar. The party also used slogans like 'all power to the soviets' this was popular with the common Russian worker, who knew that the provisional government was run by the middle classes. Bolshevik agitators would often move among the factory workers, soldiers and sailors, to rally support for the second revolution. They also set up units of armed supporters, known as the Red Guard. On the 7th of November the assault began, and the Bolsheviks seized the city of Petrograd, they stormed the winter palace, and arrested members of the provisional Government. But the success of the revolution ultimately lay in the hands of the Army, and how it would react. Luckily, the Bolsheviks had done their job well, and army group after army group fell in behind the revolutionaries. Kerensky gathered together a regiment of Cossacks, but they were easily overcome, and Kerensky fled from Russia. Following this revolution there was a huge civil war, there were many in the country that still didn't agree with soviet policy, and they raised armies to fight against the communists. Foreign powers, worried there might be a worldwide revolution, sent soldiers to support these anti communists, and there were a lot more of them than there were Bolshevik supporters. ...read more.

One story (a true one) sums up the situation. The state was so poor economically that when the power companies became privatised, the Russian Navy could not afford to pay for electricity. It was forced to send armed sailors down to the station, to ensure it had enough power to control the nuclear generators. The submarines have not been repaired or updated for a number of years now, and because of this they are highly unstable, and pose a threat to the environment, some of them should have sunk years ago. It could be argued that the Americans are offering money to improve relations between the two countries, and to prevent an environmental disaster, I am sure that that is part of it, but I feel it is important to note that the Americans are only paying for the dismantlement of the most modern submarines, the ones that still pose a military threat, not the older ones that will cause the real problems. What does that tell us about the constantly changing relationship then? I know what I think, but I won't go into detail, suffice to say that there is an awful lot of mistrust on both sides. Governments may change, but the people near the top often stay the same, and I'm not just talking about Russia either. The most up to date story of the Russian navies problems is that of there flagship, that has recently been sent back to port, because of some alleged problems with the nuclear reactor, although they are now saying it was because of the living conditions onboard. They may not be lying; a nuclear reactor leak usually does lead to some pretty nasty conditions. Anyway, the relationship has changed hugely in the last 100 years, and no one could deny that Russia is perhaps the greatest example of rapid political, economic and social upheaval of its time, perhaps of any time. Never has a country experienced so much change, and never has change come at such a price, the lives of millions, and the shattered dreams of a few. ...read more.