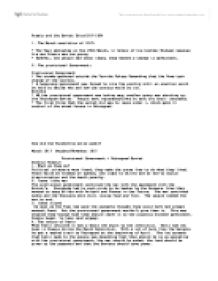 Russia and the Soviet Union1917-1924 1. The March revolution of 1917: * The Tsar abdicates on the 20th March, in favour of his brother Michael because his son Alexis was too young. * However, the people had other ideas, they wanted a change in government. 2. The provisional Government: Provisional Government * The crowds gathered outside the Tauride Palace Demanding that the Duma took charge of the country. * A temporary government was formed to rule the country until an election could be held to decide who and how the country would be run. Soviets * AS the provisional government was taking way, another group waz starting up, the Petrograd Soviet. People sent representatives to sort out their interests. * The first thing that the soviet did was to issue order 1, which gave it control of the armed forces in Petrograd. ...read more.

People began to take land anyway. 4. The return of Lenin When Lenin returned it was a whole new start to the revolution. Lenin had not been in Russia during the March Revolution. With a lot of help from the Germans he got a sealed train to Petrograd at the beginning of April. The 1st spreech that Lenin made to the people was demanding that thee should be no co-operating with the provisional government, the war should be ended, the land should be given to the peasants and that the Soviets should take power. These points were later written up in the April Theses 5. The July Days Only the Bolsheviks opposed the war. During the 1917 summer more and more common people opposed to the war. In July the Kerensky launched an attack against the Russians, which they lost. ...read more.

* Kornilov troops never arrived. The railway workers and other soldiers persuaded them not to fight their fellow Russians. * How ever the Red Guard kept their rifles. How did the Bolsheviks Seize Power? Moral was low, there were riots and fights, Russia was a descrase. The Bolsheviks were now moving in on the Winter Palace, where the provisional Government was meeting. During the afternoons, most of the Cossacks had slipped out of the palace, leaving some military cadets and the Women's death Battalion. At 9.00p.m the Aurora (a ship whose sailors supported the Bolsheviks) fired a blank shot to start the attack. There was little machine-gun fire, and very little damage was done to the palace. The women's death battalion offered no resistance, came out and went back to camp. The red guards entered and made their way along the miles of corridors. When they did meet military cadets, they gave up, as did the Provisional Government when the Red Guards found them. The Bolsheviks had control of Petrograd. ...read more.