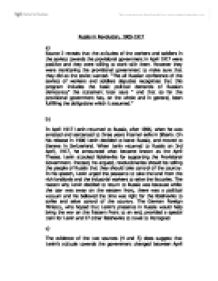 When Lenin returned to Russia on 3rd April, 1917, he announced what became known as the April Theses. Lenin attacked Bolsheviks for supporting the Provisional Government. Instead, he argued, revolutionaries should be telling the people of Russia that they should take control of the country. In his speech, Lenin urged the peasants to take the land from the rich landlords and the industrial workers to seize the factories. The reason why Lenin decided to return to Russia was because whilst the tsar was away on the eastern front, there was a political vacuum and He believed the time was right for the Bolsheviks to strike and seize control of the country. ...read more.

c) The evidence of the two sources (4 and 5) does suggest that Lenin's attitude towards the government changed between April and September 1917. Source 4 shows that Lenin wasn't overly pleased with the provisional government but didn't have a major problem with them. However in source 5, he is very unhappy with the way that the country was being run. "The Bolsheviks, by immediately proposing a democratic peace, by immediately giving the land to the peasants and by re-establishing the democratic institutions and liberties which have been distorted and shattered by Kerensky, will form a government which nobody will be able to overthrow." d) Sources 3 and 5 ...read more.