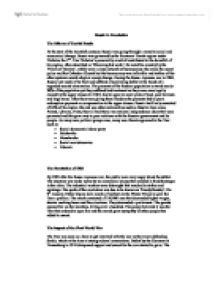 Russia In Revolution The failures of Tsarist Russia At the start of the twentieth century, Russia was going through a massive social and economical change. Russia was governed by the Romanov Tsarist regime under Nicholas the 2nd. Tsar Nicholas's personality could of contributed to the downfall of his regime, often described as 'Charming but weak'. He ruled his country by the 'Pillars of Tsarism', which were a close network of bureaucracy, the army, the secret police and the Orthodox Church but the bureaucracy was inflexible and neither of the other systems would adapt or accept change. During the Russo-Japanese war in 1904, Russia lost much of its fleet and suffered a humiliating defeat at the hands of a regarded second-class nation. The peasants of the Russian population covered nearly 99% of the population yet they suffered bad treatment as they were once legally owned by the upper classes till 1861, had to agree to small plots of land, poor harvests and large taxes. ...read more.

The spark of the revolution was due to be known as 'bloody Sunday'. On 9th January, Father Gapon led a march of workers to the Winter Palace to give the Tsar a petition. The march consisted of 150,000 men that demanded higher wages, shorter working hours and free elections. They demanded a parliament. The guards opened fire on the marchers, killing over a hundred. The people believed it was the Tsar that ordered to open fire and the march grew sympathy of other people that added to unrest. The impact of the First World War The Tsar was seen as a hero to get involved with the war as they were defending Serbia, which at the time at strong cultural connections. Defeat by the Germans at Tannenberg in 1914 dampened support and unrest for the war started to grow. ...read more.

The new government that came to power was the Provisional government but they faced new problems that would lead them to their downfall. This new government was lead by the Duma that was present during the Tsar legacy. The government was weak and responded bad to rising groups that wanted to gain control. They took the unpopular idea of continuing the war, which lead to resentment. They believed giving land to Germany would be unpopular and keeping alliances with Britain and France would keep economical gains. The failure of the Provisional Government By October 1917, the Bolshevik group had the chance to seize power from the Provisional government. The failures were very clear; they lacked support and did not put down any threats. They released from prison political leaders that could threaten them and became isolated from other supporting groups. Although the main problem was to continue with the war and lead power offensives against Germany that failed. ...read more.