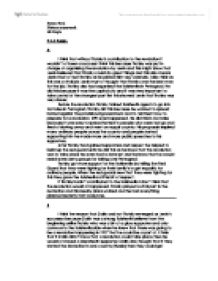 9.2.5 Russia. A I think that without Trotsky's contribution to the revolution it wouldn't of been a success I think this because Trotsky was put in charge of organising the revolution by Lenin and this might show that Lenin believed that Trotsky could do great things and this also means Lenin must of trust Trotsky as he picked him very carefully. I also think as this was a vital job Lenin must of thought that Trotsky was the best man for the job. Trotsky also had organised the Bolsheviks in Petrograd. He did this because it was the capital city and it was very important to take control of the strongest part first this showed Lenin that Trotsky was very clever. Before the revolution Trotsky trained Bolshevik agents to go into factories in Petrograd, Trotsky did this because he wanted to spread hatred against the provisional government and to tell them how to prepare for a revolution if it ever happened. He did this in factories because it was easy to spread hatred to people who were fed up and tired of slaving away and want an equal country. ...read more.

Whereas Trotsky believed that they should take over a few countries at once this was a very silly idea as they would not be able to pull it off as they were not quite big enough to do this and Lenin saw this. Stalin was a very hard worker from the beginning to the finish and he was a very healthy man around the time that Lenin died whereas Trotsky was a sick man and he also still had that glory supporter nametag. Stalin was a very sneaky person he knew what he needed to do and he did well and truly when Trotsky was very busy sorting out the revolution and being in the public eye stalin was doing the boring secretary jobs this also showed Lenin that Stalin was dedicated even to the boring jobs even though these jobs were boring and didn't seem powerful with all the jobs he did he gained quite a lot of power without anyone realising. Not only that but he worked very hard at getting political alliances and so when it came to Lenin's death surprisingly Stalin had a lot more supporters than Lenin so he was a stronger participant. ...read more.

this was called collectivisation the idea of it was to increase the amount of food grown the peasants didn't like this because they wanted to farm their own land but Stalin soon put the peasants in their place by using violence. He also did something called the five-year plans this consisted of the government setting big production targets. The workers worked very hare to achieve this and within ten years the Soviet Union had major industrial power. I think each one of these points are equally important because each one needs each other to help Stalin's power in the soviet union, because without the purges and show trials then the people who didn't support him could of made another group and taken over, without the secret police Stalin would not of been able to kill so many people, without propaganda and censorship they would have been photographs shown of Stalin being evil, radio and newspapers would tell the truth and people would think for themselves and without Stalin's economical polices the soviet union wouldn't have gained so much industrial power.i i Emma Perie 10k History coursework Mr Doyle Emma Perie History coursework Mr Doyle ...read more.