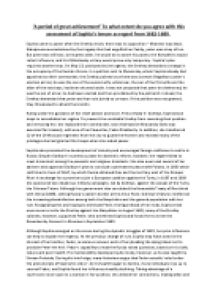 Russian History. A period of great achievement To what extent do you agree with this assessment of Sophias tenure as regent from 1682-1689?

﻿?A period of great achievement? To what extent do you agree with this assessment of Sophia?s tenure as regent from 1682-1689. Sophia came to power after the Streltsy revolt, there was no opposition ? Matveev was dead, Natalya was overwhelmed by the tragedy that had engulfed her family, peter was a boy of ten. But peter was still tsar, as he grew older, he would try to assert his power; the Naryshkins would collect influence, and this Miloslavsky victory would prove only temporary. Sophia?s plan required another step. On May 23, prompted by her agents, the Streltsy demanded a change in the occupancy of the Russian throne. In a petition sent to Khovansky, whom Sophia already had appointed as their commander, the Streltsy pointed out there was a certain illegality to peter?s election as tsar; he was the son of the second wife, while Ivan, the son of the first wife and the older of the two boys, had been shunted aside. It was not proposed that peter be dethroned; he was the son of a tsar, he had been elected and then proclaimed by the patriarch. Instead, the Streltsy demanded that peter and Ivan rule jointly as co-tsars. If the petition was not granted, they threatened to attack the kremlin. Ruling under the guidance of her chief adviser and lover, Prince Vasily V. ...read more.

Promoting the case of her brother Ivan V, a legitimate heir to the throne, Sophia attempted to convince the patriarch and the boyars that their recent decision to crown Peter should be reversed. Insisting that Peter?s election breaks monarchic laws by skipping over her brother, who would have been next in line to rule if not for his ineptitude, she proposed a shared crown with Ivan. Upon the court?s swift and unanimous rejection of dual tsars, Sophia reached to the discouraged military troop, the Streltsy, for their aid and support. The unjust dismissal of Ivan?s reign acted as a catalyst to the already displeased and frustrated troops. Multiple issues, including merciless motivational tactics and lack of rest, drove the Streltsy to violently oppose the ?unjust? election of Peter. As the fighting ceased and Peter?s life was left forever scarred by the blood spilt within his Naryshkin clan, the Streltsy received their initial demands. Following the momentum of the Streltsy rebellion, the incompetent Ivan was crowned senior tsar and Peter, of only nine years, junior tsar. Despite her gender, Sophia had been deemed the sole intellectually mature royalty at the time of Fedor?s death, making her the favourite to govern in place of the child, Peter, and the inept Ivan. Using the education and political savvy she acquired by Fedor?s side, she convinced the nobles and patriarch of her capacities to rule Russia. ...read more.

Most of the Streltsy units, however, deserted downtown Moscow for the suburb of Preobrazhenskoye and later for the Troitse-Sergiyeva Lavra, where the young tsar was living. Feeling the power slipping from her hands, Sophia sent the boyars and the Patriarch to Peter, asking him to join her in the Kremlin. He flatly refused her overtures, demanding Shaklovityi's execution and Galitzine's exile. After Sophia agreed to surrender her senior boyars, she was arrested and forced to withdraw into the Novodevichy Convent without formally taking the veil. Sophia may have plotted one last attempt at securing power, although her involvement is unclear. Regardless of her conscious effort, her fate was sealed ten years later, when the Streltsy attempted to reinstate her in the Kremlin during Peter's absence from the country. This uprising was suppressed with an iron hand, and soon the corpses of the rebels were suspended in front of Sophia's windows. Having taken the veil, she was kept in the strictest seclusion, with other nuns not allowed to see her except on Easter day. She died in the Novodevichy Convent 6 years later. Although Sophia was guided by outsiders, she therefore made mistakes which didn?t help Russia. She did create better connections with the countries surrounding Russia. She tried to stop the Turks even if she was unsuccessful. She achieved little bits for Russia but nothing was of great achievement. She also had the shadow of peter and his family hanging over her, there was always the threat of peter trying to take over power. ...read more.