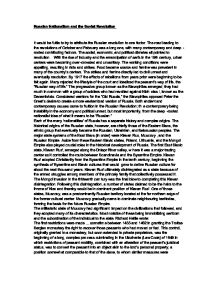 Russian Nationalism and the Soviet Revolution

Russian Nationalism and the Soviet Revolution It would be futile to try to attribute the Russian revolution to one factor. The road leading to the revolutions of October and February was a long one, with many contemporary and deep-rooted contributing factors. The social, economic, and political climates all pointed to revolution. With the rise of industry and the emancipation of serfs in the 19th century, urban centers were becoming over-crowded and unsanitary. The working conditions were appalling, resulting in riots and strikes. Food became scarce and famine was prevalent in many of the country's centers. The strikes and famine directly led to civil unrest and eventually revolution. By 1917 the effects of rebellions from years prior were beginning to be felt again. Many rejected the lifestyle of the court and idealized the peasant's way of life, the "Russian way of life." The progressive group known as the Slavophiles emerged; they had much in common with a group of soldiers who had revolted against Nicholas I, known as the Decembrists. Considered warriors for the "Old Russia," the Slavophiles opposed Peter the Great's desire to create a more westernized version of Russia. Both ancient and contemporary causes came to fruition in the Russian Revolution; the contemporary being instability in the economy and political unrest, but most importantly, from the deep-rooted nationalist idea of what it means to be "Russian." Each of the many 'nationalities' of Russia has a separate history and complex origins. The historical origins of the Russian state, however, are chiefly those of the Eastern Slavs, the ethnic group that eventually became the Russian, Ukrainian, and Belorussian peoples. ...read more.

In a more militant style of Slavophilism, there was the movement for the unification of all Slavic people under leadership of the Russian tsar and for the liberation of the Balkan Slavs from the Ottoman yoke. The Russo-Turkish War, (1877-78) is usually considered a high point of this militant Slavophilism. The general attitude towards other nations with Slavic origins varied, depending on the group involved. Still, classical Slavophiles believed that "Slavdom" (the common identity given to all people of Slavic origin) was based on Orthodox religion; as Martin E. Lewis notes, "classical Russian Slavophiles often conflated language and religion, equating Slavdom with Orthodoxy" (230) The problem with the Slavophile unification effort was that the Russian Empire, besides containing Russians, ruled over millions of Ukrainians, Poles and Belorussians, who each had their own national identities, traditions and religions. While Slavophiles praised the leadership of Russia over other nations of Slavic origin, the Poles' very identity was based on Western European culture and values, and thus resistance to Russia was natural. As a result Slavophiles were particularly hostile to the Polish nation, often attacking them in their writings. Dmitry Shlapentokh wrote: Poland was transformed into a "sharp wedge" into the very heart of the Slavonic soul with the aim of "splitting it into fragments." Nikolai Ia. Danilevsky, the late Slavophile, dubbed Poland the "Jesuitical gentry state of Poland" and that "Judas of Slavdom," which he compared to a hideous tarantula greedily devouring its eastern neighbour but unaware that its own body is being eaten by its western neighbours. ...read more.

during the Civil War, the Soviet government permitted some private enterprise to coexist with nationalized industry in the 1920s. Debate over the future of the economy provided the background for Soviet leaders to contend for power in the years after Lenin's death in 1924. By gradually consolidating his influence and isolating his rivals within the party, Joseph Stalin became the sole leader of the Soviet Union by the end of the 1920s. Though it is impossible to say that there was one sole cause to the Russian revolution, the idea of Russian Nationalism, and the sense of patriotism in each of the soviet nations is clearly the largest contributor. The road leading to the revolutions of October and February was a long one, with many contemporary and deep-rooted contributing factors. The Slavophiles were determined to protect what they believed were unique Russian traditions and culture. Effects of dozens of revolts and rebellions preceding 1917 were culminated in the February revolution. The people rejected the lifestyle of the court and had come to revere what they thought to be the traditional, simple, "Russian way of life." When the Slavophiles emerged, they pushed the social and ideological norms of Russia in to a state of national hyper-pride. Being warriors for the "Old Russia," the Slavophiles intensely pursued unification of all Russian and Slavic people. In this pursuit of unification and a sort of traditional nationalistic nostalgia, it becomes clear that hundreds of years of Russian history are relevant to an examination of the Revolution. Truly, the sense of "being Russian" is one that is not easily earned, and is undoubtedly one of the strongest nationalist identities the world has ever seen. Nanjo Tambo. ...read more.