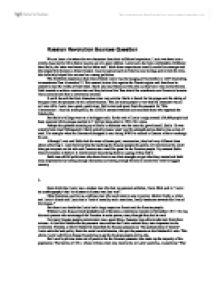 Russian Revolution Sources Question We can learn a lot about the two characters from their childhood experience. Lenin was born into a middle class family while Stalin was the son of a poor cobbler. Lenin had a far more comfortable childhood than Stalin, the latter was beaten by his father and I think these experiences actually made him stronger and this helped him become a brutal dictator. Also he learned early to hide his true feelings and to bide his time, this definitely helped him succeed as a strong politician. The childhood experience that most affected Lenin was the hanging of his brother in 1887 for plotting to assassinate Tsar Alexander III. This seemed to turn him against the Tsarist regime and from here he started to read the works of Karl Marx. Stalin also read Marx and this tells us they have very similar beliefs. Both wanted to achieve communism and they believed the Tsar should be overthrown and Russia to become first a socialist and then a communist country. It could be said that their characters were very similar. Stalin is famed for his purges and the taking of the grain from the peasants for his collectivisation. This led many people's view that his character was an evil one while Lenin was a good, gentle man. But he too took grain from the peasants for 'War Communism'. Also his secret police, the CHEKA arrested tortured and executed those who opposed the Bolsheviks. But Stalin's killings were on a far bigger scale. ...read more.

He said in a speech in 1931 that "either we [industrialise] or they crush us". He helped Russia to catch up with the Western world and for Russia this was a great thing, Russia needed to industrialise because it meant that firstly, it would be self-sufficient and not rely on the West and secondly, Russia would be able to defend herself against other countries. Finally, it could be said that Russia needed to industrialise to prove to the Western world that Communism worked. In Russia industrialisation worked but at a huge cost. There was less food because it was sold abroad, this led to famine. Industrialisation meant that millions of Russians moved into cities with factories, this led to housing problems. Many people had to sleep in incredibly cramped dormitories and some even in tents, this was particularly bad because of the harsh winters. But things did improve in the cities and the standard of living in many cities grew to levels the Russian proletariat had never known before. For example, in Magnitogorsk, a large industrial city, had 90,000 theatre seats. With industrialisation came collectivisation. This meant that the government everything, most importantly this meant the farms. Instead of different people owning small bits of land, the government took them over and joined them into vast collective farms. The people who used to own the farms, the Kulaks (land-owning peasants) were sent to gulags (labour camps). Stalin sent many people to these gulags. In just three years the number of prisoners in these camps increased from 30,000 to, as some historians have said, as many as twenty million. ...read more.

For example the Health System improved by an enormous amount and although life was hard for workers in the factories at first, the quality of life improved, some knew houses even had running water and electricity. When thinking about whom is the most important figure, it is important to think about what would have happened if they had not been alive. In my opinion if Lenin had of not been there in 1917 eventually the communists would of taken over, but perhaps not as early. Many of their policies would also have been the same because most were obvious, common sense policies. I think 'War Communism' was an obvious one, as was the NEP that followed and not just Lenin would have thought of it. By contrast Stalin change many policies that Lenin had introduced and nobody else would have done this in my opinion. For example, a man who could of been leader instead of Stalin, Trotsky believed that the ultimate goal was to spread communism whereas Stalin believed that he should make Russia a powerful country, with a hug army and a great amount of heavy industry. Also none of the other leaders who may of taken power believed that they should send so many people to prison an kill so many in his purges. So in my opinion Stalin was the most important figure because he individually had the power and used it to control Russia while Lenin was helped greatly by his government. In addition Stalin had far longer to exert power and he changed the face of Russia. But there is no way that you should forget the extraordinary role Lenin played in Russian history ...read more.