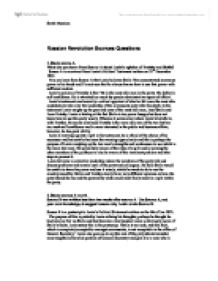 Russian Revolution Sources Questions 1. Study source A. What can you learn from Source A about Lenin's opinion of Trotsky and Stalin? Source A is an extract from Lenin's Political Testament written on 25th December 1922. You can learn from Source A that Lenin believes Stalin 'Has concentrated enormous power in his hands and I'm not sure that he always knows how to use that power with sufficient caution. Lenin's opinion of Trotsky is that 'He is the most able man in the party. His defect is self-confidence. He is attracted too much by purely administrative aspect of affairs'. Lenin's testament was basically a critical appraisal of who he felt were the most able candidates to take over the leadership of the communist party after his death. In the testament Lenin weighs up the pros and cons of the most able men, Josef Stalin and Leon Trotsky. Lenin is hinting at the fact Stalin is too power hungry but does not know how to use this party wisely. Whereas it seems clear where Lenin's beliefs lie, with Trotsky. He seems convinced Trotsky is the more able man of the two but has too much self confidence and is more interested in the public and business affairs, however, he has great ability. Lenin is warning against a split in his testament, he is afraid of the choice of his successor and has sent he has seen the warning signs clearly and this is perhaps the purpose of Lenin weighing up the two men's strengths and weaknesses to see which is the more able man. He seems fully aware of the risks of a split and is warning the other members of the politburo to also be aware of this imminent problem and take steps to prevent it. Lenin believes in collective leadership where the members of the party talk and discuss problems and remain loyal of the party and colleagues. ...read more.

Stalin had most of the support within the party and had had years of putting his supporters in important positions in the party and using them to his advantage. The disagreements over the windmill in source I represents the ongoing disagreement between Trotsky and Stalin over policies for industrialisation. During his argument with Trotsky, Stalin joined forces with the Rightists who wanted to continue with NEP (Lenin's New Economic Policy). This was not because Stalin necessarily agreed with their views but because he hoped they would help him drive Trotsky, Kamenev and Zinoviev from the party. In 'The Animal Farm', Source I, after Trotsky had made a brilliant speech and 'Napoleon stood up and uttered a high pitched whimper of a kind none of the other dogs had ever heard before'. Nine enormous dogs then came bounding into the barn and dashed straight for Snowball and he 'Sprang from his place just in time only to escape the from their snapping jaws'. After this Snowball was seen no more and the animals were very surprised to hear that the windmill was going to be built after all. This represents the time when Stalin had Trotsky expelled from the party with the help of his supporters, being the dogs, to vote him out of the party and expel him. The building of the windmill represents Stalin changing his mind on the Soviet industry plans. In 1928 Stalin argued in favour of now ending NEP and expanding industry as far as possible, the exact theory that Trotsky has supported before he was expelled. The Rightists argued against him but no one would listen as Stalin had the most support. The Right Opposition had no other choice but to resign. We must bear in mind that while Source I is a very useful source, George Orwell, the author, was against Stalin and criticised his actions so his views on the events may have been slightly biased and supportive towards Trotsky. ...read more.

He did not attend Lenin's funeral, was ill at strategic times and did not even take the trouble to cultivate friends and get people on his side. Stalin, on the other hand, was a long-standing member of the Bolshevik party, though not a senior member until 1912. He was General Secretary of the communist party. This gave him a lot of benefit as, although he got the post easily as no one else wanted it, it gave him the power to promote and dismiss people from important jobs within the party and set the agenda for Politburo meetings. He was a peasant, and disguised his ruthless instinct to rule and abuse power and was seen by most as a modest and loyal man. The only down side to his campaign was losing Lenin's support at the end of his life. Stalin's patriotic behaviour concealed this and gave him a lot of support. . Stalin's habit of changing his mind, adjusting his views depending on whom he needed to get rid of only worked because he put his ideas into practise so efficiently and was inclined to action rather than speculation. However, without he other important factors he would not have made it. Trotsky described Stalin as ' The party's most eminent mediocrity' in Source J. Trotsky thought that Stalin's job being high ranking allowed him to make important decisions, but he was ordinary and practical thinking. He was middle degree but all his luck, rational plans and important friends this eventually led him to be distinguished and gain total power by his 50th birthday. Source L, an extract taken from a world history book written by a historian in 1964 out lines the struggle. He described Trotsky as being ' The man of ideas' and Stalin the 'Hard headed practical man. The struggle was between two men of very different backgrounds who had disliked each other for a very long time. Stalin acted fast and efficiently to gain control due to his practical ideas and good luck. Sarah Munnion ...read more.