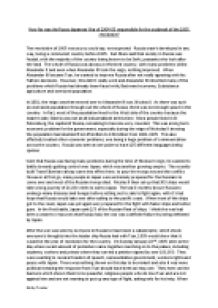 ﻿How far was the Russo-Japanese War of 1904-05 responsible for the outbreak of the 1905 revolution? The revolution of 1905 was as you could say, not expected. Russia wasn?t developed in any way, being a communist country before 1905. Karl Marx said that society in Russia was feudal, with the majority of the country being known to be Serfs, peasants who look after the land. The whole of Russia was always a reformed country, with many problems whilst Alexander II and even when Alexander III took the reign, nothing improved. When Alexander III became Tsar, he wanted to improve Russia after not really agreeing with his Fathers decisions. However, this didn?t really work and Alexander III inherited many of the problems which Russia had already been faced with; Backward economy, Subsistance agriculture and oversized population. In 1881, the reign was then moved over to Alexander III son, Nicolas II. As there was such an oversized population through out the whole of Russia, there was not enough space in the country. ...read more.

Nicolas II then set up that 300 ships would take a long journey of 21,000 miles to sail to Japan. The last 8 months shown Russia to undergo many diseases and hunger before setting out to sale to fight again, with it?s last hope that Russia would take over after sailing to the pacific coast. When most of the ships got to the coast, Japan was yet again very prepared for the fight with faster ships and better guns. In the first battle, Japan sank 2/3 of the Russian fleet of ships. I think the war had been a waste to resources that Russia had, the war was a definite failure by being defeated by Japan. After the war was seen by everyone in Russia to have been a catastrophe, which shook everyone?s thoughts into the leader ship Russia had with Tsar, 1905 would show that it would be the year of revolution for the country. ...read more.

This is when for the first time, Tsar weighed his options. It would be either to give the people their civil rights, what the deserved and so long wished for. On the other hand, the option would be to crush the rebellion of the workers. This is when it came to the October manifesto, where there needed to be speed to quickly change the order of the government. People in Russia were now given freedom of speech including their civil rights. When summing up everything that occurred during 1904-05, it seems that everything happened quite quickly. With there being such a high population rate it probably made it more difficult and Tsar may have felt more pressure. In my opinion, I think that the war of Russo-Japan had a massive effect of the revolution, I can?t imagine that if there hadn?t been a war, that there would have been a revolution. I think the war put a lot into clear perspective, especially seeing how badly the country worked together when trying to defeat Japan, by immense failure and lack of communication. Kirsty Trusler ...read more.