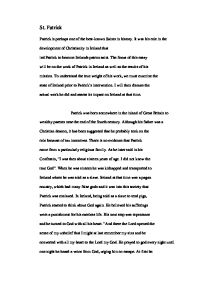 St. Patrick Patrick is perhaps one of the best-known Saints in history. It was his role in the development of Christianity in Ireland that led Patrick to become Irelands patron saint. The focus of this essay will be on the work of Patrick in Ireland as well as the results of his mission. To understand the true weight of his work, we must examine the state of Ireland prior to Patrick's intervention. I will then discuss the actual work he did and assess its impact on Ireland at that time. Patrick was born somewhere in the island of Great Britain to wealthy parents near the end of the fourth century. Although his father was a Christian deacon, it has been suggested that he probably took on the role because of tax incentives. There is no evidence that Patrick came from a particularly religious family. As he later said in his Confessio, "I was then about sixteen years of age. I did not know the true God". When he was sixteen he was kidnapped and transported to Ireland where he was sold as a slave. Ireland at that time was a pagan country, which had many false gods and it was into this society that Patrick was enslaved. ...read more.

After these early successes Patrick began to preach the message of Christianity throughout Ireland. He persuaded more and more people to convert to Christianity, using many different techniques. He gave gifts to his kings and nobles so they would give him protection and also that they would receive him into their presence. Thus he used persuasion and encouragement to spread the word of God. Although he gave gifts to kings and nobles, he was anxious not to receive any in return. This art of giving and receiving gifts was a finely tuned system that was in operation at that time. However Patrick felt that if he were to receive gifts in return then it might seem that he was out to make a profit. Patrick's fortunes varied greatly from time to time as there is some accounts of him travelling around with kings and the nobility. However opposite to this, there are also accounts of him being bound in chains and even at one stage he was going to be executed. Although Patrick encouraged Irish people to become monks and nuns there was no divide in his mind between the celibate life and the outside world. ...read more.

It is also clear that Patrick was not afraid to use coercion and the legend mentioned above involving the death of the druid clearly highlights this. As said above, Patrick was often in serious danger and one time in his Confessio, Patrick claimed that he had paid protection to 15 different people. He gives the picture of intense hardship and suffering and he says that life was especially hard foe the women. Patrick seems to have concentrated on Woman, on converting them and then getting them to vow celibacy. He was also faced with many opponents of Christianity who claimed that the churches teachings and doctrines only gained credence from a public that was unable to tell truth from nonsense. However Patrick survived all these attacks and t was his success in converting the Irish people that truly made him a saint. It is true to say that he is the single most important figure in Irish Christian history. There are many areas in Ireland named after Patrick, which proves the esteem in which the Irish people hold him. Croagh Patrick, off the coast of Mayo, is named in honour of Patrick and a pilgrimage takes place there every year on the first Sunday of July. Patrick claimed to have baptised many thousands of people and his place in Irish history is indeed unique. ...read more.