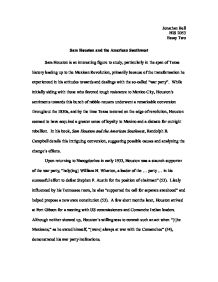 Sam Houston and the American Southwest - the transformation he experienced in his attitudes towards and dealings with the so-called &quot;war party&quot;.

Jonathan Bell HIS 2053 Essay Two Sam Houston and the American Southwest Sam Houston is an interesting figure to study, particularly in the span of Texas history leading up to the Mexican Revolution, primarily because of the transformation he experienced in his attitudes towards and dealings with the so-called "war party". While initially siding with those who favored tough resistance to Mexico City, Houston's sentiments towards this bunch of rabble-rousers underwent a remarkable conversion throughout the 1830s, and by the time Texas teetered on the edge of revolution, Houston seemed to have acquired a greater sense of loyalty to Mexico and a distaste for outright rebellion. In his book, Sam Houston and the American Southwest, Randolph B. ...read more.

A few short months later, Houston arrived at Fort Gibson for a meeting with US commissioners and Comanche Indian leaders. Although neither showed up, Houston's willingness to commit such an act when "[t]he Mexicans," as he stated himself, "[were] always at war with the Comanches" (54), demonstrated his war party inclinations. Yet events in Texas and Mexico City soon changed Houston's perspective. Once the petition for statehood had been finalized, Houston realized Texas's greatest potential for success rested in the hands of Stephen F. Austin, who was at the time on the peace side, and advocated that he go to Mexico City to present it. Statements Houston later made also showed a greater willingness to negotiate, such as one made to a New York City man in 1834 ...read more.

Yet soon after, Stephen F. Austin returned from his eighteen-month incarceration in Mexico City and began pressing for war, Houston's tune changed, and he wrote a letter to the US pleading for volunteer assistance. The change didn't last long, however, because as war loomed on the horizon, its sympathizers became increasingly radical and Houston formally broke with the party, according to Campbell, "by successfully opposing an immediate declaration of independence in favor of a statement explaining the taking up of arms as a fight for statehood under the Constitution of 1824" (61). As history would have it, Houston's final stance against such immediate independence would not win out, and Texas would become an independent republic the following March. Yet the transformation he experienced in his views over the issue is extremely intriguing, and the underlying reasons behind it are certainly worthy of our attention. ...read more.