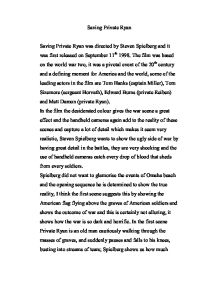 Saving Private Ryan Saving Private Ryan was directed by Steven Spielberg and it was first released on September 11th 1998. The film was based on the world war two, it was a pivotal event of the 20th century and a defining moment for America and the world, some of the leading actors in the film are Tom Hanks (captain Miller), Tom Sizemore (sergeant Horvath), Edward Burns (private Reiben) and Matt Damon (private Ryan). In the film the desiderated colour gives the war scene a great effect and the handheld cameras again add to the reality of these scenes and capture a lot of detail which makes it seem very realistic, Steven Spielberg wants ...read more.

American soldiers and shows the outcome of war and this is certainly not alluring, it shows how the war is so dark and horrific. In the first scene Private Ryan is an old man cautiously walking through the masses of graves, and suddenly pauses and falls to his knees, busting into streams of tears; Spielberg shows us how much sorrow war brings to peoples lives. When the camera zooms into Private Ryan's eyes you can actually see the sheer hurt in his eyes and the transition takes place when we almost see the cold icy sea in his mournful eyes, we then hear the waves crashing against the Americans boat, the colour fades and the fear we see in Private Ryan's eyes turns into the captain Miller's eyes. ...read more.

The soldiers then jump over board into the icy waters, the Germans shoot at them and as they hit the water the bullets are rapidly muted as they hustle through the sea piercing though the soldier's lifeless corpses, the sea turns to an instant red, a sea of blood and massacre, Spielberg continues to show the audience what war is really like. Captain initial reaction is one of shock as he sees dead fish scattered among the bodies of soldiers, human beings. Perhaps Spielberg is trying to convey a sense of a human being, has no greater vale than a fish in this scene, this really shows us what war is like, and the panning view shows the audience the destruction of the war and how futile war is. Damon Teague ...read more.