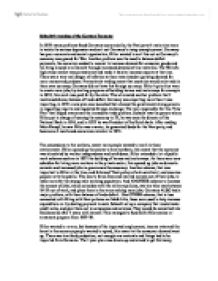 Schacht's running of the German Economy In 1933 many problems faced Germany economically, the Nazi party's main aims were to tackle the serious depression

Schacht's running of the German Economy In 1933 many problems faced Germany economically, the Nazi party's main aims were to tackle the serious depression and sort out Germany's rising unemployment. Germany has poor economic and social organization, Hitler wanted to sort this out so Germany's economy was geared for War. Another problem was the need to balance deficit payments, the economy needed to recover to increase demand for consumer goods and too bring around re-armament through increased demand of raw materials. The World's high value market was protectionist and made it hard to increase exports at the time. There was a very real danger of inflation as there was already a growing demand for more money and products. Protectionist trading meant that countries would only trade in there own currency, Germany did not have this foreign currency. Hitler's priorities were to create more jobs, by starting programs of building homes and motorways for example in 1932, this work was paid for by the state. This all created another problem that I mentioned above, balance of trade deficit. ...read more.

This was to force Jews and married women out of there jobs, to make room for the young male working population. And ANOTHER scheme to increase the amount of jobs, which coincides with the military policies, was too take men between 18-25 out of work, and place them in the army making more jobs. Germany ALSO had a major problem, with there balance of trade deficit. One OTHER scheme, that is less connected with fitting with Nazi policies are Mefo bills, these were used to help increase expenditure on by dealing payment in cash. Schacht set up a company that would make credit notes, and give them out to companies and services. They would be converted into Reichsmarks after 5 years with interest. This managed to fund half of Germanies re-armament program from 1933-38. Hitler wanted to re-arm, but because of the improved employment, income rates and the boost in the economy people wanted to spend, this meant tat the consumer demand went up. There was low food production, not enough raw materials and things had to be imported from Romania. ...read more.

supporting the race for readiness for war, or the consumer. No one argued for a total concentration, they wanted a compromise with one being more dominant. Originally, it was assumed Hitler would be pro-guns, nowadays it is assumed that he was concerned to give good supplies of butter as well as weaponry. The people who were pro-butter, were Schacht, Industrialists and the Military, they wanted to develop consumer goods, develop exports, limit rearmament and develop trade links between other countries. On the side of 'guns', was Goering the 'economic dictator', he wanted major re-armament to 'appease Hitler' and an autarky siege economy, which would also appease Hitler who had experienced the problems of being starved out in WW1. In conclusion, this way of running the economy, re-inflated confidence in the unemployed, around 1.5 million jobs were created. Industrial produce rose by 60 percent during the time these policies of self-sufficiency were introduced and the GDP rose by 40 percent. Germany no longer had to borrow money, as they had sorted out the problem of foreign trade, and balance of payment by becoming self sufficient. In the end, Goering won over Schacht because his policies of self-sufficiency and readiness for war appealed more than the 'butter' side of the playing field. ...read more.