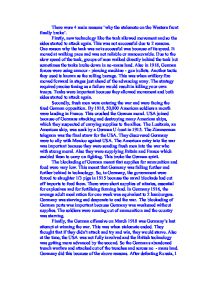 Sclieffen Plan &amp;There were 4 main reasons 'why the stalemate on the Western front finally broke'.

There were 4 main reasons 'why the stalemate on the Western front finally broke'. Firstly, new technology like the tank allowed movement and so the sides started to attack again. This was not successful due to 2 reasons. One reason why the tank was not successful was because of its speed. It moved at walking pace and was not reliable or manoeuvrable. Due to the slow speed of the tank, groups of men walked directly behind the tank but sometimes the tanks broke down in no-mans land. Also in 1918, German forces were using armour - piercing machine - gun bullets. Another tactic they used is known as the rolling barrage. This was when artillery fire moved forward in stages just ahead of the advancing army. The strategy required precise timing as a failure would result in killing your own troops. Tanks were important because they allowed movement and both sides started to attack again. Secondly, fresh men were entering the war and were facing the tired German opposition. ...read more.

So the Germans abandoned trench warfare and attacked out of the trenches and across no - mans land. Germany did this because of the above reasons. After defeating Russia, 1 million men from the eastern front came across to the western front and joined their fellow Germans. Using poisoned explosives they overwhelmed the British and French. It was successful to begin with but as Germany ran out of supplies they started to fall. 400,000 of Germany's best soldiers were casualties. Ludendorff broke the stalemate of trench warfare by covering 50 miles in 3 days. By now the troops were tired and hungry. They refused to advance, but instead they looted British supplies. Ludendorff's brilliant strategy ended with an embarrassing failure. The German offensive was important because it was the event that finally broke the stalemate. In conclusion, I agree partly with the statement. But I think that the blockading of German ports was the most important reason why the stalemate on the Western front broke. ...read more.

His plan involved using 90% of Germany's army to attack France and to capture Paris. The remainder of the army was used to contain Russia and defend the west border of Germany with France, while France was being defeated. He took into consideration that Germany's western border was next to French forts so he decided 'hook' around France through Belgium. At the time, Belgium was a neutral country so Schlieffen expected no resistance and The German Kaiser said that Britain would not go to war over their 1839 treaty with Belgium, which he described as a 'scrap of paper'. He also believed, even if Britain did defend Belgium, there was no need to worry about the British Expeditionary Force, which he called a 'contemptible little army'. If the army went through Belgium, they would have been able to surround Paris and capture it so France would surrender. Schlieffen also assumed that Britain and Russia would not go to war with Germany if France was easily defeated. After defeating France, Germany would then be able to concentrate on defeating the Russians in the east, instead of fighting a war on two fronts. ...read more.