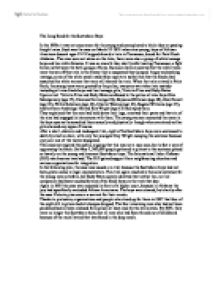 Scottsboro Rape Trials. In the 1930s it was not uncommon for the young and unemployed to hitch rides on passing freight trains. Such was the case on March 25 1931 when nine young, boys of African American descent ages 13-21 hopped aboard a train in Tennes

The Long Road for the Scottsboro Boys In the 1930s it was not uncommon for the young and unemployed to hitch rides on passing freight trains. Such was the case on March 25 1931 when nine young, boys of African American descent ages 13-21 hopped aboard a train in Tennessee, bound for Paint Rock Alabama. .The nine were not alone on the train, there were also a group of white teenage boys and two white females. It was no smooth ride, shortly after leaving Tennessee, a fight broke out between the both groups of boys. Rumours have circulated that the white teens were thrown off the train in the frenzy but is suspected they jumped. ...read more.

and Roy Wright (age 13) had raped them. They explained that the men had held down their legs, removed their pants and that six of the nine had engaged in intercourse with them. The young women recounted the craze in the boys eyes as the assaulted them sexually and physically though when examined neither girls showed any signs of trauma. After a short, shallow and inadequate trial, eight of the Scottsboro boys were sentenced to death by electric chair, with only the youngest Roy Wright escaping the sentence because one juror out of the twelve disagreed. This outcome angered the public, arguing that this was not a rape case, but in fact a way of oppressing the black. ...read more.

Again in 1935 the case was reopened in front of a higher court, because in Alabama the jury had specifically excluded African Americans. The boys were cleared, but shortly after the case Victoria price swore a warrant for their arrests. Thanks to protesters, organizations and people who stood up for them in 1937 that four of the eight still in prison had all charges dropped. The four remaining men who had not been pardoned had all been released from prison at least once by the late sixties. By 1937, they were no longer the Scottsboro boys, but all men who had been forced out of childhood because of the racial hatred that was found in the deep south. ...read more.