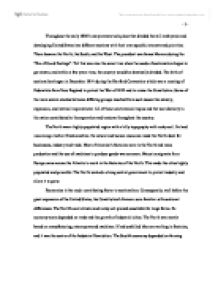 Sectionalism. Throughout the early 1800s many events took place that divided the still embryonic and developing United States into different sections with their own specific interests and priorities.

Throughout the early 1800's many events took place that divided the still embryonic and developing United States into different sections with their own specific interests and priorities. There became the North, the South, and the West. The president was James Monroe during the "Era of Good Feelings". Yet this was also the same time when the seeds of sectionalism began to germinate, and within a few years time, the country would be drastically divided. The birth of sectionalism began in December 1814 during the Hartford Convention which was a meeting of Federalists from New England to protest the War of 1812 and to revise the Constitution. Some of the more severe clashes between differing groups resulted from such issues like slavery, expansion, and internal improvement. All of these controversial topics and the vast diversity in the nation contributed to the separation and tensions throughout the country. The North was a highly populated region with a hilly topography with rocky soil. Its land runs along a harbor filled coastline. Its natural and human resources made the North ideal for businesses, industry and trade. ...read more.

The greatest of which was cotton, that was sold to the North as well as England. Cotton farming wore out the soil which left the Southerners looking for more good land. The South relied on many industrial goods which they received from the North or imported from England. Although most southerners did not own slaves, the South favored a weak central government and strong state governments because they wanted to make their own decisions on controversial issues such as slavery. The most prominent issue was slavery. This was an issue that has been going on for a crucially long time. The divisions in the country brought about by slavery seem to be categorized into two main groups, abolitionists, and slave holders. These two groups also were divided geographically for the most part due to the South's need of slaves for cheap, and reliable man power, and the North, as it was not an agriculturally based economy and needed little in the way of unskilled laborers. It was very easy for the North to bash the South's slavery because their economy did not depend upon slavery. ...read more.

This short growing season made the use of slaves in the West financially wasteful. So farmers of the West grew grain without the use of slaves. Major cities like Chicago, St. Louis, and Cincinnati became trade centers and grew up along major bodies of water. Many hardships were endured by Western farmers, among them were: angry Native Americans, the need for more land, and a more reliable way to transport their grains and lumber to markets to sell them. Lastly, the West wanted a strong central government to help solve their problems. In conclusion I've outlined the geography, economics, population, and political views of each of the different regions that emerged during the American Republic in the early 19th century. All of the above examples are all representative of issues of the time which played a large roll in sectionalism, and the breakup of the United States. Over the long run, it is a miracle that, with the vast spectrum of people in the country, the regions have managed to stay together, through thick and thin, driven by one common force, "Freedom." Work Citied List Bragdon, Henry W., Samuel P. McCutchen, and Donald A. Richie. History of the American Nation. Columbus OH: Glencoe/McGraw-Hill, 1998. ?? ?? ?? ?? - 1 - ...read more.