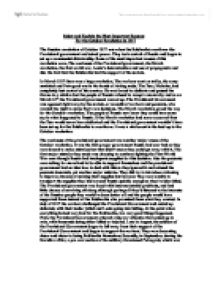 Select and Explain the Most Important Reasons For the October Revolution in 1917.

The Bolsheviks had established themselves as the only party which stood in opposition to continuing the war effort. The Bolshevik workers had to unite and fight as one against the military. Now that the Bolsheviks had the support of the workers, they were able to win the important elections in early September in important Russian industrial centers. By the middle of September, the Bolsheviks had formally acquired a majority in the St. Petersburg Soviet. The First World War was a huge problem for Russia. The Provisional Government chose not to withdraw from the First World War even though they didn't have the means to keep fighting. The provisional government was very weak and failed to live up to its promise of ending Russia's involvement in the war. They kept Russia in the war and just made things worse for themselves and for Russia. They didn't want to face the harsh treaty they knew Germany would give them if they surrendered. By making this decision the Provisional government lost a lot of support the soldiers were beginning to desert and they were fast running out of supplies. Lack of food meant peasants faced famine and disease. People turned to Lenin and the Bolsheviks who were promising to give them what they want if gained power. ...read more.

In my opinion there is no one reason that made the revolution happen above any other although it could be argued for any of them. If I had to choose a most important reason it would be the fact that Lenin had the support of the soviets. Without the power in the cities and support from the army and the public he would've had nothing to back up his ideas and plans. However the fact that he had the support of the soviets was contributed to by many other reasons. Propaganda used by the Bolsheviks encouraged support from the soviets and the peasants. The weakness of the Provisional government led to them having a lack of support and therefore a lack of power to rebuff the Bolshevik advances. The provisional government made too many mistakes and the Russian people had had enough. They wanted what they wanted and now. The Provisional government's decision to continue the war also led to the Bolsheviks receiving more support for their more peaceful, anti-war approach. All these problems contributing and linking to one another led to the October revolution. If all these things hadn't happened at the same time perhaps the revolution might never have taken place. All these factors put together were too much and Russia needed a change. The situation as it was and the events of the time ensured the October Revolution of 1917. Laura Price ...read more.