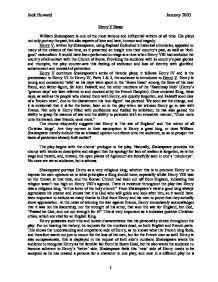 Henry V Essay William Shakespeare is one of the most famous and influential writers of all time. His plays not only portray the past, but also aspects of love and hate, humour and tragedy. Henry V, written by Shakespeare, using Raphael Holinshed's historical chronicles, appealed to many of the citizens of that time, as it presented an insight into their country's past, as well as 'feel-good' nationalism. It would have been performed on stage at a time when Henry VIII had secluded the country of all contact with the Church of Rome. Providing the audience with its country's past glories and triumphs, the play counter-acts this feeling of seclusion and loss of identity with glorified achievement and renewal of patriotism. Henry V continues Shakespeare's series of historic plays; it follows Henry IV and is the predecessor to Henry VI. In Henry IV, Parts 1 & 2, the audience is introduced to Henry V. Henry is young and considered 'wild' as his days were spent in the 'Boars Head' among the likes of his dear friend, and father-figure, Sir John Falstaff, and the other members of the 'Eastcheap Mob' (Henry's 'greener days' are later referred to and mocked at by the French Dauphin). ...read more.

Another example of this is when Henry speaks to the Governor of Harfleur. Perhaps Henry is bluffing in this speech, as one is led to believe otherwise as evidence suggests that Henry was compassionate and was a marvellous persuasive rhetoric speaker, "With conscience wide as hell, mowing like grass your fresh fair virgins, and your flowering infants." Although Henry had many loyal and faithful men, he also had a few un-loyal ones. On preparing to set sail for France, Henry confronts the three traitors in a debatable manner. He gradually builds up the pressure whilst speaking to them; he somehow knows that they are traitors. Some may say that prolonging the traitor's agony was unjust and inhumane; whilst others hold the view that Henry had every right to make the traitors squirm. Henry is presented with a case where a decision needs to be made as to what to do about a man who was a little drunk the other night. He tells Exeter to set free the man, but Scroop, Grey and Cambridge (traitors) disagree and express that they think that the man should be punished, "that's mercy, but too much security," "let him be punished." ...read more.

This is a great part to Henry's character, he shows passion, care, insecurity: this is a side to Henry that the audience have not witnessed before and is another attempt from Shakespeare to make Henry look as good as possible; perhaps also this is an indication as to what Shakespeare thinks about Henry VIII, in that, he should try to make the relationship work before marriage. Henry seems very nervous and, at first, a little reluctant. He soon progresses and finds out that courage on the battlefields isn't the same as courage in the bedroom. To conclude, one is manipulated to believe that Henry V was a great man and King, whose principals are strongly religious and are just and fair. However, one must acknowledge that Henry V, as it has been presented, is a creation, an adaptation of what Raphael Holinshed researched and of what William Shakespeare interpreted Henry to be like, or to what an ideal king should consist of. Further more, Henry, as Shakespeare viewed him, was a true star of England, who did give great, inspirational speeches to persuade his army, who did woo Katherine, and who did choose his responsibilities over friendship. However, the true Henry lies in Shakespeare. Shakespeare is the creator, the puppeteer; Shakespeare is the man who wrote the speeches, it was he who wooed Katherine. Jack Howard January 2003 1 ...read more.