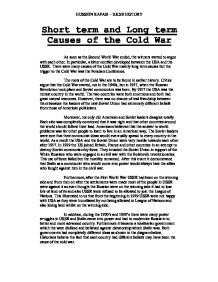 Short term and Long term Causes of the Cold War.

Short term and Long term Causes of the Cold War As soon as the Second World War ended, the winners started to argue with each other. In particular, a bitter conflict developed between the USA and the USSR. There were many causes of the Cold War mainly long term causes but the trigger to the Cold War was the Potsdam Conference. The roots of the Cold War are to be found in earlier history. Critics argue that the Cold War started, not in the 1940s, but in 1917, when the Russian Revolution took place and Soviet communism was born. By 1917 the USA was the richest country in the world. The two countries were both enormous and both had great natural resources. However, there was no chance of real friendship between them because the leaders of the new Soviet Union had extremely different beliefs from those of American politicians. Moreover, not only did American and Soviet leaders disagree totally. Each side was completely convinced that it was right and that other countries around the world should follow their lead. Americans believed that the answer to world problems was for other people to learn to live in an American way. The Soviet leaders were sure that their communist ideas would eventually spread to every country in the world. As a result the USA and the Soviet Union were very hostile towards each other after 1917. ...read more.

most out of all the rest of the countries that did the fighting as most of the damage was done to them and 20 million people had died who came from Russia. Russia was forced to fight and Stalin thought that the West was not helping them. This again illustrates to us that as result of most fighting in war there were conflicts between the two sides. The Yalta Conference, February 1945. The three leaders had met before at the Tehran summit in late 1943. The meeting at Yalta, in the Soviet Union, took place between 4 and 11 February 1945. Stalin had refused to leave the USSR so the two Western leaders had to go to him. The three men were pleased at the way the war was going. President Roosevelt talked about the friendly, family' atmosphere of the meeting but beneath the surface, serious disagreements existed. At the conference these points were discussed: * Stalin agreed to enter the war against Japan once Germany had surrendered. * They agreed that Germany would be divided into four zones: American, French, British and Soviet. Since the German capital, Berlin, was deep in the Soviet zone, it was agreed that Berlin itself would also be divided into four zones. * As Allied soldiers advanced through Germany they were revealing the horrors of the Nazi concentration camps. ...read more.

Stalin wanted compensation from Germany Truman, however, was once again determined not to repeat the mistakes at the end of the First World War and resisted this demand. * The Soviet Union was to receive some additional industrial equipment from the western zones of occupation: little of this was ever handed over. * The Soviet Union wanted to play a part in the running of the rich German industrial area of the Ruhr. The USA rejected this idea. * The Soviet Union wanted to share in the occupation of Japan. Truman firmly blocked this idea. * The USA and Britain asked for a greater say in what went on in Eastern Europe. Stalin rejected this suggestion. Due to all these arguments and disagreements we could say that both the USA and USSR had conflicting ideas and could never cooperate with each other therefore we can say that the Potsdam conference was one of the short term causes of the Cold War, it triggered the war to start off. The Iron Curtain represented the new hostility towards the Soviet Union. It was encouraged by Winston Churchill in a famous speech on 5 March 1946. Churchill called for an American-British alliance to meet the communist menace. This therefore emphasises to us that as it was said that the West was covered by an Iron Curtain showed to us that the leader of USSR would not be so pleased and feel they are isolated and left aside with no importance dividing it from the rest of the world. HUSSEIN KAPASI - IGCSE HISTORY ...read more.