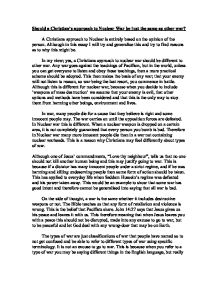 Should a Christian's approach to Nuclear War be just the same as other war?

Should a Christian's approach to Nuclear War be just the same as other war? A Christians approach to Nuclear is entirely based on the opinion of the person. Although in this essay I will try and generalise this and try to find reasons as to why this might be. In my view; yes, a Christians approach to nuclear war should be different to other war. Any war goes against the teachings of Pacifism, but in the world, unless you can get everyone to listen and obey these teachings, then a more practical scheme should be adopted. This then makes the basis of any war; that your enemy will not listen to reason, so war being the last resort, you commence in battle. ...read more.

Although one of Jesus' commandments, "Love thy neighbour", tells us that no one should not kill another human being and this may justify going to war. This is because if a dictator has many innocent people under a strict regime, and if he was harming and killing undeserving people then some form of action should be taken. This has applied to everyday life when Saddam Hussein's regime was defeated and his power taken away. This would be an example to show that some war has good intent and therefore cannot be generalised into saying that all war is bad. On the side of thought, a war is the same whether it includes destructive weapons or not. ...read more.

Throughout the Bible Jesus is saying that people should have faith in God, believe in his powers and trust that any person in this world who has done wrong and disrespects his creation will be dealt with in God's method. Therefore I conclude that whether or not a Christian approaches nuclear war and other war in a different is an opinionated topic and that if a person chooses to say that any form of violence is wrong is justified just as much as war being sorted into different categories of reason. E.g. Nuclear war and other. And by taking away the choice of believing in something is denying the right of the individual to make decisions. ...read more.