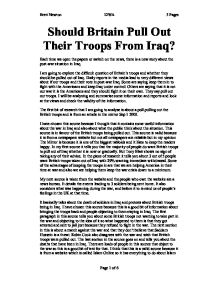 Should Britain Pull Out Their Troops From Iraq?

Should Britain Pull Out Their Troops From Iraq? Each time we open the papers or switch on the news, there is a new story about the post-war situation in Iraq. I am going to explore the difficult question of Britain's troops and whether they should be pulled out of Iraq. Daily reports in the media lead to very different views about if our troops and their vote in post-war Iraq. Some are saying keep them in to fight with the Americans and keep Iraq under control. Others are saying that it is not our war it is the Americans and they should fight it on their own. They say pull out our troops. I will be analysing and summarise some information and reports and look at the views and check the validity of the information. The first bit of research that I am going to analyse is about a poll pulling out the British troops and is from an article in the mirror Sep 1 2003. I have chosen this source because I thought that it contains some useful information about the war in Iraq and also about what the public think about the situation. ...read more.

This source is of a valid because it is written by a news reporter so she would know what is going on over there because they would have cameramen and people over there doing work. This source as valid as the others sources and gets its information through America. Comparing the Sources Sources one and two are reasons why troops should be pulled out of Iraq. Source one tells you about the demand for the troops to be pulled out of Iraq when asked whether to, to be pulled out now, gradually or to stay in for as long as necessary and most of the population voted for them to be pulled out gradually. Source two talks about how people have protested and have been sent to prison for arguing against going to fight in the war but also how people have died in the war and that this is why we should not be at war any longer. They are similar in the feeling that it shouldn't have been our war in the first place and troops are being killed because of the way the war was handled. If you compare source three with the other sources they are about the same the same thing but they have different views on whether the troops should stay there or not. ...read more.

"Iraq has divided the international community. It has divided this party, the country, families, friends," Blair said. "I know many people are disappointed, hurt and angry. I know many believe profoundly the action we took was wrong." But despite striking a conciliatory note, Blair made clear he had no regrets about launching a war alongside U.S. President George W. Bush and without the approval of the United Nations Security Council. "I would take the same decision again," Blair said. The speech to delegates was considered a crucial test for a prime minister facing a crisis of confidence among voters and members of his own party who believe he has strayed too far from Labour's socialist roots. Source 4 Iraq: British Public Concerned By Attacks on Troops, But Against Leaving By Jan Jun Continued attacks against coalition forces in Iraq have citizens in the U.K. concerned about the fate of the roughly 10,000 British soldiers still based there. Still, many Britons say they want Western troops and civilian administrators to "finish the job" and stay in Iraq until peace is restored and a democratic government is in place. Experts, however, say that support could quickly drain away if attacks on soldiers continue. Brett Newton 12WA 5 Pages Page 1 of 6 ...read more.