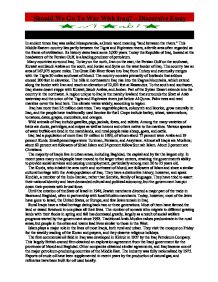 Should We Go To War With Iraq? - Discursive Essay

Should We Go To War With Iraq? - Discursive Essay In ancient times Iraq was called Mesopotamia, a Greek word meaning "land between the rivers." This Middle Eastern country lies partly between the Tigris and Euphrates rivers, a fertile area often regarded as the frame of civilization. Its history dates back some 5,000 years. Today the Republic of Iraq, located at the headwaters of the Persian Gulf, is a leading producer of petroleum. Many countries surround Iraq. Turkey on the north, Iran on the east, the Persian Gulf on the southeast, Kuwait and Saudi Arabia on the south, and Jordan and Syria on the west border of Iraq. The country has an area of 167,975 square miles. The Great Zab River flows into Iraq from Turkey and eventually merges with the Tigris 30 miles southeast of Mosul. The country consists primarily of lowlands that seldom exceed 300 feet in elevation. The hills in northeastern Iraq rise into the Zagros Mountains, which extend along the border with Iran and reach an elevation of 12,001 feet at Rawanduz. To the south and southwest, Iraq shares desert steppe with Kuwait, Saudi Arabia, and Jordan. Part of the Syrian Desert extends into the country in the northwest. A region unique to Iraq is the marshy lowland that surrounds the Shatt al Arab waterway and the union of the Tigris and Euphrates rivers just below Al Qurna. ...read more.

The first Allied prisoners of war were released. The official cease-fire was accepted and signed on April 6th. 532,000 U.S. forces served in Operation Desert Storm. There were a total of 148 U.S. battle deaths during the Gulf War, 145 non-battle deaths, and 467 wounded in action. 11 years later on and a very similar situation is at hand. The same evil tyrant only a different President Bush. Also, so far Iraq has not actually committed an act of violence against another nation but it is believed that they plan to for they have more weapons than they are allowed under the UN's regulations and it is also predicted that they have or soon will have weapons of mass destruction such as implements of nuclear and biological warfare. UN weapons inspectors are currently searching Iraq for such weapons but are yet to produce enough evidence to obtain a UN mandate for war. Recently, the United States and Britain have signalled they believe they already have United Nations authority for a war against Iraq and that no further UN resolution is necessary. At a meeting with the US Secretary of State, Colin Powell, in Washington, Britain's Foreign Secretary, Jack Straw, said that if the UN Security Council did not back the use of force against Iraq, "the authority of the UN and the international order" would be at stake. ...read more.

This suggests that he has something to hide. As I mentioned earlier, a large percentage of this countries petroleum supplies come from Iraq. If America decides to take military action against Iraq and get rid of Saddam Hussein, the Iraqi dictator will leave behind a lot of oil. This could send the current oil prices plummeting. Although this may be good news to the consumer, companies with shares in the mining industry could lose out on hundreds of pounds worth of investments. Also many British oil companies could go out of business, which could trigger a recession in the whole economy of the United Kingdom. This may sound implausible but it is a real hazard that has to be considered in this situation. When all of the evidence is taken in to consideration, it is plain to see that the number of reasons for a war with Iraq easily outnumbers the reasons against it but when you look at the content of the reasons, most of the grounds for an attack are insubstantial to justify a fully fledged war with Saddam Hussein. On the one hand he may have weapons of mass destruction but does this compensate for the bombing of millions of innocent people? Surely there is a way to avoid a war fought with missile and payed for by victim's lives. My opinion is that forces should be dispatched in to Iraq but only to seize their arsenals and control their firepower and only use force when necessary against the probable resistance. ...read more.