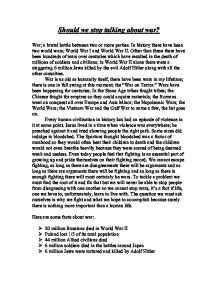 Should we stop talking about war?

Should we stop talking about war? War; a brutal battle between two or more parties. In history there have been two world wars; World War I and World War II. Other than these there have been hundreds of wars over centuries which have resulted in the death of millions of soldiers and civilians; in World War II alone there were a staggering 6 million Jews killed by the evil Adolf Hitler along with all the other casualties. War is as old as humanity itself, there have been wars in my lifetime; there is one in full swing at this moment; the "War on Terror." Wars have been happening for centuries. In the Stone Age tribes fought tribes; the Chinese fought for empires so they could acquire materials; the Romans went on conquest all over Europe and Asia Minor; the Napoleonic Wars; the World Wars; the Vietnam War and the Gulf War to name a few, the list goes on. Every human civilisation in history has had an episode of violence in it at some point. ...read more.

died because of the wars they fought in; many wars are fought by people fighting for what they believe in so if we stop discussing the war then how will we remember the soldiers? > How are we going to learn from our mistakes if we forget one of the biggest mistakes we have ever made; choosing to go to war? > Thousands of people have lost friends and loved ones in wars; if we forget the wars then we will be throwing it all in their faces. Anyway, I find it very hard to believe that someone could forget a war so easily. Especially a war which took the lives of 80 million people as did World War II. If we tried hard enough we could maybe forgive, but forgetting is too much to ask. All those brave and courageous soldiers who gave and took lives; we, who bear the fruits of their sacrifice, say that we can forget the sacrifice they made for us. They lived in fear, we live in hope. ...read more.

It would certainly kill a large number of people in a large vicinity but even then no one would be able to visit the site for decades, such a huge atrocity which quite possibly started from a slight disagreement. In my opinion it is imperative that we talk about war, remembering the millions that died and imagining how many more we'd lose if we had another war like the first two world wars. Realistically, could we really handle that? I personally feel not, it would be too much. We hear, almost everyday, on the news that there is deadlock in the Middle East peace process and that fighting broke out in Northern Ireland. I believe that as long as people have an opinion then there will be arguments. If those arguments are not resolved peacefully then it may result in fighting. As long as there is war we should talk about it because as I said earlier, we cannot run from it and talking might make the process a bit easier. We would all love to live in a war-free world, but this may quite possibly be only a dream. ...read more.