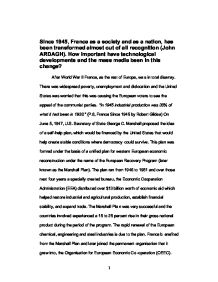 Since 1945, France as a society and as a nation, has been transformed almost out of all recognition (John ARDAGH). How important have technological developments and the mass media been in this change?

Since 1945, France as a society and as a nation, has been transformed almost out of all recognition (John ARDAGH). How important have technological developments and the mass media been in this change? After World War II France, as the rest of Europe, was in total disarray. There was widespread poverty, unemployment and dislocation and the United States was worried that this was causing the European voters to see the appeal of the communist parties. "In 1945 industrial production was 38% of what it had been in 1938." (P.8, France Since 1945 by Robert Gildea) On June 5, 1947, U.S. Secretary of State George C. Marshall proposed the idea of a self-help plan, which would be financed by the United States that would help create stable conditions where democracy could survive. This plan was formed under the basis of a unified plan for western European economic reconstruction under the name of the European Recovery Program (later known as the Marshall Plan). The plan ran from 1948 to 1951 and over those next four years a specially created bureau, the Economic Cooperation Administration (EEA) distributed over $13 billion worth of economic aid which helped restore industrial and agricultural production, establish financial stability, and expand trade. ...read more.

France was the third nation after the United States and the Soviet Union to launch a Satellite (1965). France is a member of the European Space Agency (ESA), which developed the Ariane expendable launcher during the 1970's; as a response to US refusal to guarantee flights for communications satellites, which might compete with their telecommunications carriers. Another example of France's technological expertise in transport is its car industry, namely Renault, Peugeot SA (including Citro�n), which all originated at the end of the 19th century and are still successful. The Michelin Tire Company has long been regarded as the most innovative of tire companies in the world and competitors have copied many of its inventions. Michelin invented steel belted radial tyres in 1948 and are currently working on the revolutionary run-flat tyre, code named PAX. Michelin also have the most innovative manufacturing process code named C3M, requiring more automation and less labour. France benefits from a dense and diversified transport network. SNCF's "Train � grande vitesse" (TGV) began in 1981, covering the 265-mile (426 kilometre) Paris to Lyon journey at a cruising speed of 168 mph (270 kph) and having a top speed of 235mph (378 kph). ...read more.

Even though the music industry is international France has always felt it had to defend its own culture and heritage. The French chanson was like poetry set to music, which was one reason for the delay of the rock revolution in France. Although French musicians and singers were often influenced by American and British style rock music such as Elvis and the Beatles, singers like Johnny Halliday, Michel Sardou, Serge Gainsbourg and Patricia Kaas all had their own inimitable styles. Under pressure from the music business the French minister of culture sponsored a law that gave French songs 40% of airtime on French radio. I agree with John Ardagh's opinion that the French nation and society has been changed drastically since 1945. Although the French have always resisted change because of their immense pride in their culture and heritage, they have ultimately given way and managed to preserve their culture while at the same time often ending up at the forefront of technology and mass media in the modern world. As you will notice, often due to France's reluctance to embrace the modern technological world and competition from foreign companies, mass media and culture, the French government has had to intervene at appropriate moments to save French industry, technology and culture with large amounts of financial aid and laws aimed in their favour. ...read more.