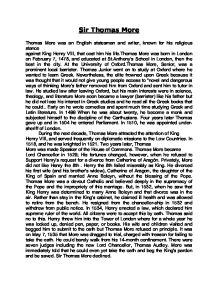 Sir Thomas More Thomas More was an English statesman and writer, known for his religious stance against King Henry VIII, that cost him his life.Thomas More was born in London on February 7, 1478, and educated at St.Anthony's School in London, then the best in the city. At the University of Oxford.Thomas More, Senior, was a prominent local barrister. Thomas Junior went on to study at Oxford where he wanted to learn Greek. Nevertheless, the elite frowned upon Greek because it was thought that it would not give young people access to "novel and dangerous ways of thinking More's father removed him from Oxford and sent him to tutor in law. He studied law after leaving Oxford, but his main interests were in science, theology, and literature More soon became a lawyer (barrister) ...read more.

Privately, More did not like Henry the 8th . Henry the 8th failed miserably as King. He divorced his first wife (and his brother's widow), Catherine of Aragon, the daughter of the King of Spain and married Anne Boleyn, without the blessing of the Pope. Thomas More was a devout Catholic and believed deeply in the supremacy of the Pope and the impropriety of this marriage. But, in 1532, when he saw that King Henry was determined to marry Anne Boleyn and that divorce was in the air. Rather than stay in the King's cabinet, he claimed ill health and was allowed to retire from the bench. He resigned from the chancellor-ship in 1532 and withdrew from public notice. In 1534, Henry enacted a law, which declared him supreme ruler of the world. ...read more.

Condemned for his stand, Henry the 8th commuted the sentence to a quick beheading. He was be-headed on July 7, 1535. His head was stuck on London Bridge where it stayed for several months (his daughter later bought it). When news came of Thomas More death, Henry the 8th, then 44 years old, quickly confiscated all of Thomas More's property and forced Thomas More's wife and family to start anew. He even negated special legal assignments that Thomas More had devised to provide for his family in case he was executed. Anne Boleyn was beheaded eleven months after Thomas More, on charges of adultery. Henry the 8th went on to marry four more wives, another of which was also beheaded. Henry died in 1547. During his rein, there had been an average of 120 executions a month in England. Thomas More was named a Catholic saint in 1866. ...read more.