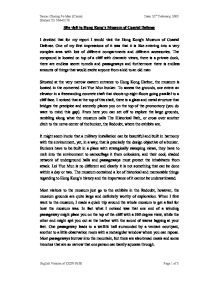 Site visit to Hong Kong's Museum of Coastal Defense I decided that for my report I would visit the Hong Kong's Museum of Coastal Defense. One of my first impressions of it was that it is like entering into a very complex area with lots of different compartments and different accessories. The compound is located on top of a cliff with dramatic views, there is a private dock, there are endless secret tunnels and passageways and furthermore there is endless amounts of things that would excite anyone from a kid to an old man Situated at the very narrow eastern entrance to Hong Kong Harbor, the museum is located in the converted Lei Yue Mun bunker. To access the grounds, one enters an elevator in a freestanding concrete shaft that shoots up eight floors going parallel to a cliff face. I noticed that at the top of this shaft, there is a glass and metal structure that bridges the precipice and securely places you on the top of the promontory (you do want to mind this gap). From here you can set off to explore the large grounds, rambling along what the museum calls The Historical Path, or cross over another ditch to the nerve center of the bunker, the Redoubt, where the exhibits are. ...read more.

The Qing Dynasty was founded not by the Han Chinese people who form the overwhelming majority of the population of China proper, but by the Manchu</a>s, a semi-nomadic people not even known by that name when they first rose to prominence in what is now northeastern China. Taking advantage of the political instability and popular rebellions convulsing the Ming dynasty, the highly organized military forces of the Manchus swept into the Ming capital of Beijing in 1644 and there remained until the Qing dynasty was overthrown in a revolution in 1911, with the last emperor abdicating early in 1912. The 268 years of Qing dynasty China saw glorious successes, humiliating defeats, and profound changes to virtually all aspects of life. Today's China has in many ways been shaped by these experiences. The consolidation of Qing power was accompanied by territorial expansion, and the borders of modern China largely reflect successful Qing military campaigns. The incorporation of new lands and peoples required careful handling, and Manchu experience of nomadic culture and a willingness to adopt different postures toward different groups such as Mongols and Tibetans enhanced Qing diplomatic effectiveness. The seeds of the huge population increase were perhaps sown during the stability of the first 200 years of Qing rule, with its economic expansion, the opening ...read more.

Relegated to the role of pure survival, the troops stationed in the Bunker were soon defeated by powerful Japanese artillery and by the simple fact that they were heavily outmanned. In certain parts of the Historical Trail, evidence of bullet and shrapnel damage stemming from this battle can still be seen. The government has done a valiant effort from preventing this monument from becoming further decayed, or worse, being replaced by a high rise. With steel bridges transporting you over ditches, glass partitions precariously separating you from precipices, and the metal winches and support beams of the canopy clearly visible, this has got to be the funkiest post-modern concrete bunker in the world. It is therefore not surprising that this museum has already won Hong Kong's most prestigious architecture award. After the end of the trip, when I looked back at my trip to the coastal defence museum, I realized that I had learnt so much more about Chinese history. The museum itself may not be big, however the materials that it contains clearly are special and not what you see everyday. Anyone interested in history should take a look at it, as it clearly reflects the development of the history of Hong Kong. ?? ?? ?? ?? Name: Cheung Po Man (Claire) Date: 23rd February, 2005 Student ID: 50442178 English Version of CCIV 0102 Page 1 of 5 ...read more.