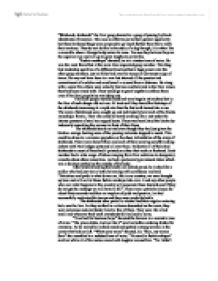 &quot;Skinheads, skinheads&quot; the Nazi gang chanted to a gang of passing by black inhabitants of America. This was an effort to prove their greater superiority but these hardened thugs were prepared to go much further than this to mark their territory.

"Skinheads, skinheads" the Nazi gang chanted to a gang of passing by black inhabitants of America. This was an effort to prove their greater superiority but these hardened thugs were prepared to go much further than this to mark their territory. They do not do this in the style of a dog though; it is rather like a crocodile when a foreign body enters its zone. You see they believe they are the superior race and will go to great lengths to prove this. "Fuckin monkeys" shouted Jez in a sinister tone of voice. He was the most feared but at the same time respected gang member. This thug had leadership qualities of a different kind and had a huge power over the other gang members, just as Hitler had over his troops in Germanys reign of terror. ...read more.

Their ribs could be heard cracking like a nut under the intense pressure of steel toe capped boots. They even humiliated the blacks by indecently assaulting the woman in front of their faces. The skinheads stood out and even though they had just given the blacks a savage beating none of the passing motorists stopped to assist. This could be down to a common prejudice or the sheer intimidation of the army of skinheads. There were about fifteen and each of them wearing scruffy looking jackets with Nazi badges plastered all over them. Evidently all of them had skinheads as most of them had it printed on either their neck or forehead. Each member had a wide range of tattoos ranging from Nazi emblems to derogatory remarks about ethnic minorities. ...read more.

As they walked in a silence descended on the room, they were notorious and everybody lived in fear of them. They were like a bad smell and wherever they went everybody felt inclined to leave. "Your bad for business boys" shouted the barman in a sarcastic tone of voice. "The place stinks...but we like it" said Jez before ordering drinks for everyone. As he waited he looked round and spotted a young woman in the corner that had not left. "Whats your name" shouted Jez. "Sara, my names Sara" she mumbled in a subdued tone of voice. "No need to fuckin whisper" said Jez while all of his mates roared with laughter around him. "No I didn't mean it, come and join us, what you drinking". She points to a bottle of red wine and Jez orders it for her. He is clearly attracted to her so he ...read more.