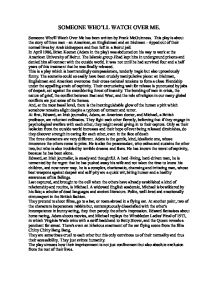 Someone Who'll Watch Over Me has been written by Frank McGuinness. This play is about the story of three men - an American, an Englishman and an Irishman - ripped out of their normal lives by Arab kidnappers and then left in a Beirut jail.

SOMEONE WHO'LL WATCH OVER ME. Someone Who'll Watch Over Me has been written by Frank McGuinness. This play is about the story of three men - an American, an Englishman and an Irishman - ripped out of their normal lives by Arab kidnappers and then left in a Beirut jail. In April 1986, Brian Keenan (Adam in the play) was abducted on his way to work at the American University of Beirut. The Islamic group Jihad kept him in underground prisons and denied him all contact with the outside world. It was not until he had survived four and a half years of this treatment that he was finally released. ...read more.

At first, Edward, an Irish journalist, Adam, an American doctor, and Michael, a British professor, are reluctant cellmates. They fight each other fiercely, believing that if they engage in psychological warfare with each other, they might avoid giving in to their captors. Only as their isolation from the outside world increases and their hope of ever being released diminishes, do they discover strength in caring for each other, even in the face of death The three characters are very different. Adam is the gentle, kind, idealistic one, whose innocence the others come to prize. He is also the peacemaker, who calms and sustains the other two, but who is also troubled by terrible dreams and fears. ...read more.

At another point, two of the characters impersonate rabbits but, contemptuously dissatisfied with the other's incompetence in bunny acting, they then parody the other's impression. Edward fantasises about horse racing, Adam shoots movies, and Michael replays the Wimbledon Ladies' Final of 1977, in which Virginia Wade wins with a swift backhand to Betty Stover, and the Queen reveals a penchant for sweat. There's even an hilarious enactment of the car flying scene from the film Chitty Chitty Bang Bang. They are sometimes cruel to each other but this only convinces us of their normality and thus their accessibility. They just evince humanity. The play stresses how their imprisonment is not just confinement but also absolute exclusion from the rest of their lives. ...read more.