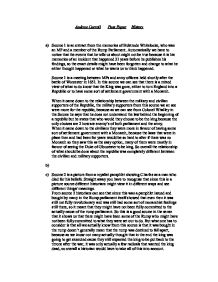 Source 1 is a meeting between MPs and army officers held shortly after the battle of Worcester in 1651. In this source we can see that there is a mixed view of what to do know that the King was gone

Andrew Carroll Pass Paper History a) Source 1 is an extract from the memories of Bulstrode Whitelocke, who was an MP and a member of the Rump Parliament. Automatically we have to notice that the events that he tells us about might not be true because it is his memories of an incident that happened 31 years before he publishes his findings, so the exact details might have been forgotten and change to what he either thought happened or what he wants us to think happened. Source 1 is a meeting between MPs and army officers held shortly after the battle of Worcester in 1651. In this source we can see that there is a mixed view of what to do know that the King was gone, either to turn England into a Republic or to have some sort of settlement government with a Monarch. ...read more.

b) c) Source 2 is a picture from a royalist pamphlet showing Charles as a man who died for his beliefs. Straight away you have to recognise that since this is a picture source different historians might view it in different ways and see different things/ meanings. From source 2 historians can see that since this was a pamphlet issued and bought by many in the Rump parliament itself showed that even then it was still not fully revolutionary and was still had some sort of monarchist feelings still there, so it meant that they might have not been fully committed to the actually cause of the rump parliament. So this is a good source in the sense that it shows us that there might have been some of the Rump who might have not been fully committed to what they were set out to do. ...read more.

In source 4 it tells us that the general view over the country was that people were glad that parliament had collapsed, because they had failed to repay loan made during the civil war and fulfilling promises that they had made and also saddling the country with a war against the Dutch. So overall form the source we can see that the view is that collapse was meeting with appreciation, but when it come out how useful it was to explain the collapse of parliament it really isn't that much useful because it mostly explains that people were happy it had happened, but it doesn't really explain way it did happen so when it comes to how useful this source is a historian has to look beyond the face value of this source to try and find what they want to know. d) ...read more.