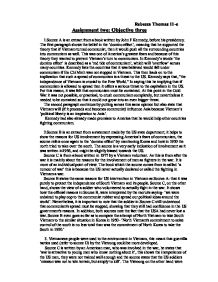 Source A is an extract from a book written by John F Kennedy, before his presidency. The first paragraph shows the belief in the 'domino effect', - if Vietnam turned communist

Rebecca Thomas 11-o Assignment two: Objective three 1 Source A is an extract from a book written by John F Kennedy, before his presidency. The first paragraph shows the belief in the 'domino effect', meaning that he supported the theory that if Vietnam turned communist, then it would push all the surrounding countries into communism as well. This was one of America's greatest fears and because of this theory they wanted to prevent Vietnam's turn to communism. In Kennedy's words 'the domino effect' is described as a 'red tide of communism', which will 'overflow' across many countries. Kennedy lists the countries that it was believed would fall under communism if Ho Chi Minh was not stopped in Vietnam. This then leads on to the implication that such a spread of communism is a threat to the US. Kennedy says that, "the independence of Vietnam is crucial to the Free World." In saying this he implying that if communism is allowed to spread then it offers a serious threat to the capitalism in the US. For this reason, it was felt that communism must be contained. At this point in the Cold War it was not possible, or practical, to crush communism completely, but nevertheless it needed to be contained so that it could not grow into an even bigger threat. The second paragraph continues by putting across this same opinion but also state that Vietnam will (if it proceeds and becomes communist) influence Asia because Vietnam's 'political liberty is an inspiration to Asia'. Kennedy had also already made promises to America that he would help other countries fighting communism. 2 Source B is an extract from a statement made by the US state department; it helps to show the reasons for US involvement by expressing America's fears of communism, the source refers once again to the 'domino effect' by mentioning Korea and how in 1950 the north tried to take over the south. ...read more.

Also the percentages mentioned in the source do not add up to one hundred percent and so we are left not fully informed. The problems with television are that clips can be selected to give a certain image, and in this case information and footage of the events in Vietnam were probably chosen to promote the involvement of the US. Therefore, despite source F seeming to be quite useful on the surface, its data seems to be flawed in a number of ways. It fails to mention the sort of people that were asked, so it is difficult to put the statistics in context. Source G is useful because it comes from a respected opinion poll and therefore can be trusted to a certain extent. However whilst it is clear that from 1965 to 1968 the public's view of the most important problem was Vietnam, it is not clear as to what aspect of the Vietnam war. It could be one of all manner of aspects, including opposition to the war or could be concerned with victory. The point is that we don't know; all we know is that it was an important issue in the public's mind. Source I is useful because, despite any possible spin put on by the reporter, the event described most likely happened. Furthermore, the event itself is horrific on its own even if the reporter did twist the facts somewhat. However, it must be noted that the article was held back from publishing for two years (from 1968 to 1970). This could have been for a number of reasons. The most probable is because it was probably believed that it would have an adverse effect on public opinion. Considering the nature of the article, publishing it in 1968 could have been disastrous if the public decided to take action against the government. Furthermore, it could be argued that it was delayed until after the 1968 election, perhaps so that it wouldn't affect the voters' decisions. ...read more.

The shock factor also played an important part of this. Rather uniquely, the Vietnam War also saw a new aspect of reporting. For the first time, they were out just for facts mainly because that's what the public wanted. The more facts a reporter could give, the more popular the story would be. This, quite obviously, resulted in a much greater informed public. Lastly, footage was repeated over and over again and this had the effect of drilling events into the public. It became a part of their lives and they knew exactly what was going on. This must have had an effect on their opinions as to whether what they were seeing should be happening. Having said this, there are of course other reasons for the changing attitudes but, in my opinion, these played a lesser role. To begin with, there were magazines and newspapers, which, whilst still around during previous wars, were uncensored for the most part. Therefore, they reflected similar events as television but they also put across various opinions, particularly in cartoons such as the one in Source L. To a lesser extent, radio also informed people of what was happening in Vietnam. There was also the growing pop culture in the US. Protest singers such as Bob Dillan, Joan Baez, the Byrds and John Lennon (later in the 1970s) influenced other people's opinions by putting across theirs in a more creative way. Songs such as the one in Source K effectively put across their opinions in a very different way, that made people stop and think about whether the war was right or not. In conclusion, I would say that there were definitely other reasons for the change in the public's attitudes to the war but I think that television was the most important, not least because it triggered a change in the way the other medias put across their information. It was television that allowed the public to actually see what was happening right at the front line. This was a first and it raised public awareness enormously by providing them with hard, uncensored facts. ...read more.