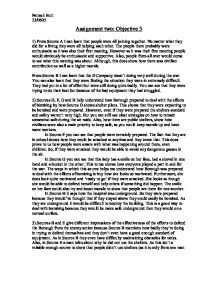 Source based questions on the Blitz.

Assignment two: Objective 3 1) From Source A I can learn that people were all joining together. No matter what they did for a living they were all helping each other. The people there probably were enthusiastic as it was also their first meeting. However as it was their first meeting people would obviously be enthusiastic and supportive. Also, people from all over would come to see what this meeting was about. Although, this does show how there was civilian contribution as well as a higher morale. From Source B I can learn that the D Company wasn't doing very well during the war. You can also learn that they were finding the situation they were in extremely difficult. They had put in a lot of effort but were still doing quite badly. You can see that they were trying to do their best but because of the bad equipment they had struggled. 2) Sources D, F, G and H help understand how Borough prepared to deal with the effects of bombing by how Source D shows shelter plans. ...read more.

In Source H it says how the hospital was underground. So they were prepared because they would've thought that if they stayed above they could easily be bombed. As they are underground it would be difficult to destroy the building. This is a good way to deal with bombing because they would be more safe underground then they would on a normal surface. 3) Sources B and E give different impressions of the effectiveness of the efforts to defend the Borough from the enemy action because Source B mentions how badly they're doing in trying to defend themselves and they don't even have a good enough standard of equipment. As in Source B they even have difficulty maintaining obstacles for tanks. Also, in Source E a man talks about why he did not use the shelters. As this isn't a reliable enough source to show that people didn't use shelters (as it is only from one man and it's only his view), it still shows that he was very confident in staying in a shelter as he would die anyway. ...read more.

You might think that they might not have been expecting casualties like this and as he is quite an important man writing this, you wouldn't think how detailed his entry is. In source J you can see a timetable and see almost anything you would need to. The fact that source K wasn't published also illustrates how that this was the last thing people would want to see, as it would crush civilian morale. But this also shows how much was kept secret from them. You can also almost see how unexpected this whole thing was. 5) Sources L and M aren't accurate as because they were made long after the events they show and aren't even a photograph of the war at the time. Source L is a drawing, which makes it very unreliable as the artist doesn't even have to be at the place he's drawing or could have easily made any adjustments to the drawing. ...read more.