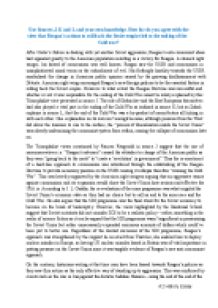 (Sources) - How far do you agree with the view that Reagans actions to roll back the Soviet empire led to the ending of the Cold war?

ï»¿Use Sources J, K and L and your own knowledge. How far do you agree with the view that Reagan’s actions to roll back the Soviet empire led to the ending of the Cold war? After Carter’s failure in dealing with yet another Soviet aggression; Reagan’s anti-communist ideas had appealed greatly to the American population resulting in a victory for Reagan. A staunch right winger, his hatred of communism was well known. Reagan saw the USSR and communism in unsophisticated moral terms as the embodiment of evil. His forthright hostility towards the USSR symbolised the change in American public opinion caused by the growing disillusionment with Détente. American right wing encouraged Reagan’s new foreign policies to be the essential factors in rolling back the Soviet empire. However to what extent the Reagan Doctrine was successful and whether or not it was responsible for the ending of the Cold War cannot be solely explained by this Triumphalist view presented in source J. The role of Gorbachev and the East Europeans themselves had also played a vital part in the ending of the Cold War as outlined in source K; but as Zubok explains in source L, that the end of the Cold War was a by-product of many factors all linking in with each other. ...read more.

On the other hand, Schweitzer argues that the end of the Cold War was due to Reagan turning away from the policy of Détente towards a more aggressive stance; his policy marked a change from that of previous US administrations but he based most of his research on interviews with Triumphalist writers who served in the Reagan administration making him more favourable to Reagan. In source K, Clifford argues that it was Gorbachev’s change in intentions and attitude to working with the West was the key factor that reduced international tension between the superpowers: “It was Gorbachev... who... ended the Cold War”. This view is also emphasised by critics of Triumphalists; Raymond Garthoff argues that the end of the Cold War was due to Gorbachev’s New Political Thinking and the concessions he was prepared to offer to the USA. Similarly, in the Ideational School, Triumphalist views had been challenged by historians who point to the fact that Soviet leaders had already come to the conclusion that superpower rivalry was counterproductive before the arms programme of Reagan. Soviets had decided that they have been over-committing enormous amounts of resources to the military e.g. the Afghan commitment had been a huge drain before Reagan so his arms programme created little additional pressure. According to M. ...read more.

Zubok has drawn attention to this factor by arguing that the generational shift in society was to be reflected by the generational change amongst the leadership. However, he criticises Gorbachev to have ?failed terribly? domestically as he became increasingly unpopular in the USSR and his policies for economic restructuring had failed to improve the living standards of the Soviet population. As a result food queues; strikes by workers in key industries who had not been paid wages for months; inflation and rising crime were all features of Soviet life by 1988. But even his failures had played an important role alongside the ?progressive paralysis? of the Soviet Union. Zubok, being a new Russian historian, argues that Soviet archives has allowed a re-evaluation of the impact of national experiences and ideology on policy-making therefore making it possible to provide a balanced view rather than biased views present in sources J and K. weighing everything up, it is allowed to come to a conclusion that source L outweighed the other sources and gave its own interpretation altogether; suggesting that Reagan and his anti-communist policies were only a small contribution to the demise of communism and thus the end of the Cold War. A2 History Essay ...read more.