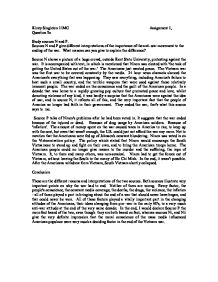 Sources N and P give different interpretations of the importance of the anti-war movement to the ending of the war. What reasons can you give to explain the difference?

Kirsty Singleton 11MG Assignment 1, Question 3e Study sources N and P. Sources N and P give different interpretations of the importance of the anti-war movement to the ending of the war. What reasons can you give to explain the difference? Source N shows a picture of a huge crowd, outside Kent State University, protesting against the war. It is accompanied with text, in which is mentioned that Nixon was elected with 'the task of getting the United States out of the war.' The Americans just wanted peace. The Vietnam war was the first war to be covered constantly by the media. 24 hour news channels showed the American's everything that was happening. ...read more.

They ended the war, that's what this source says to me. Source P talks of Nixon's problems after he had been voted in. It suggests that the war ended because of the injured or dead. Because of drug usage by American soldiers. Because of 'inflation'. The amount of money spent on the war caused taxes in America to rise, to keep up with the cost, but even that wasn't enough, the U.S. could just not afford the war any more. Not to mention that the Americans were fed up of Johnson's constant blundering. Nixon was voted in on the Vietnamization policy. The policy which stated that Nixon would encourage the South Vietnamese to stand up and fight on their own, and to bring the American troops home. ...read more.

Neither of them are wrong. Every factor, the people's conscience, the constant media coverage, the deaths, the drugs, the violence, the inflation - all of these played a part in bringing about the end of a war that should never have began, and that could never be won. All of these factors played a vitally important part in the changing attitudes of the Americans, their ideas changing from pro- war in the early 60's, to a very much anti-war attitude at the end of the very same decade. In the end, I would declare Source P the more fact based of the two, even though they are both based on fact, whereas sources Ni, and Nii give the very definite impression that the moral conscience of the mass media influenced American populace were very much a deciding factor in the end of the Vietnam war. ...read more.