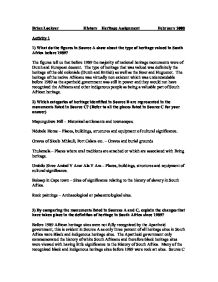 South African Heritage - Where we come from?

Brian Lockyer History _ Heritage Assignment February 2008 Activity 1 1) What do the figures in Source A show about the type of heritage valued in South Africa before 1989? The figures tell us that before 1989 the majority of national heritage monuments were of Dutch and European descent. The type of heritage that was valued was definitely the heritage of the old colonials (Dutch and British) as well as the Boer and Huguenot. The heritage of the native Africans was virtually non existent which was understandable before 1989 as the apartheid government was still in power and they would not have recognized the Africans and other indigenous people as being a valuable part of South African heritage. 2) Which categories of heritage identified in Source B are represented in the monuments listed in Source C? (Refer to all the places listed in Source C for your answer) Mapungubwe Hill - Historical settlements and townscapes. Ndebele Home - Places, buildings, structures and equipment of cultural significance. Graves of Sicelo Mhlauli, Fort Calata etc. - Graves and burial grounds Thulamela - Places where oral traditions are attached or which are associated with living heritage. Umbilo Shree Ambal V Anar Ala Y Am - Places, buildings, structures and equipment of cultural significance. Bokaap in Cape town - Sites of significance relating to the history of slavery in South Africa. Rock paintings - Archaeological or palaeontological sites. 3) By comparing the monuments listed in Sources A and C, explain the changes that have taken place in the definition of heritage in South Africa since 1989? Before 1989 African heritage sites were not fully recognized by the Apartheid government, this is evident in Source A as only three percent of all heritage sites in South Africa were Black and indigenous heritage sites. The Apartheid government only commemorated the history of white South Africans and therefore black heritage sites were viewed with having little significance to the History of South Africa. ...read more.

The fact that the honorees are made up of people from all different races does emphasize that the government aimed to make us all as South Africans come together to acknowledge the pain that people went through in order to lay the foundations for our country. Activity 4 1) What aspects of History have been selected to promote heritage commercially in Sources I and J? Both sources give visitors a unique experience of particular aspects of South African culture. Source I describes Gold Reef City as being a unique place where guests will be able to experience 'African music, dance and history'. The source emphasizes the glamour and benefits of gold mining to promote Gold Reef City which in turn attracts tourists. Source J promotes heritage commercially as visitors can stay in an actual Zulu village. The guests are able to experience all the traditions of the Zulu culture as well as understanding their heritage. In both the sources only the positive aspects of history have been used to promote heritage. For example in source I all the positives of gold mining are emphasized but what about the people who suffered and died? The marketers were clearly not interested in portraying the true heritage of South African gold mining but they were mainly concerned with showing the luxuries and wealth associated with gold, in order to generate as much profit as possible. 2) What objections do you think there could be to using heritage in this way? I think there could be a lot of objections to using heritage in this way as it does not give an accurate description of heritage. Since the aim of such projects in Source I and J is to make as much money as possible I do not think that the managers of such projects care about giving an accurate portrayal of true heritage and cultural identity. There main aims are to generate income and therefore their main concerns are attracting tourists and this is achieved by giving ...read more.

'It's an important step, but it's a first step.' What does Source E reveal about the ideas of heritage in different knowledge systems? Propose a way in which world heritage criteria could be less 'Eurocentric' (refer to the discussion of heritage in different knowledge systems in unit 7.1). Source E reveals a lack of interaction and communication between the committees that choose the World heritage sites and the ethnic people who propose the sites. The bottom line is that the committees that choose the sites must be more tolerant and they must consider the true value of the site to the ethnic people before accepting or rejecting the site. It is true that both parties have different opinions about potential sites but there must be some sort of agreement in order for World heritage sites to become less 'Eurocentric.' Ethnic people must become more involved in choosing World heritage sites as peoples' values and beliefs must be considered when assessing the importance of a site. Activity 3 1) Why would the picture on the cover in Source G have caught the attention of many readers? The picture would have caught the attention of many readers as Adam and Eve are stereotyped as being white, however recent research has suggested that the origin of man comes from Africa. The picture is very controversial especially to religious people as the picture is a contradiction to what the bible says. 2) How has recent genetic research changed ideas about race? Due to genetic research, we now know that we did not evolve from different ancestors in different parts of the world but we are all descendants from the same ancestor who inhabited Africa about 200,000 years ago. These findings explain why the earliest human remains were found in Africa. 3) According to Source H, what theory is unlikely to change because most people now accept it? According to the source, South Africa has the oldest remains this is the least likely theory to change as people all over the world accept this fact and it is common knowledge. ...read more.