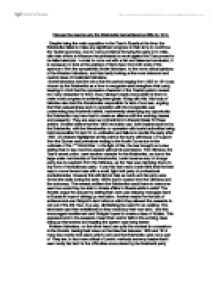 Discuss the reasons why the Bolsheviks had achieved so little by 1914 Despite being the main opposition to the Tsar in Russia at the time, the Bolsheviks failed to make any significant progress in their aims to overthrow the Tsarist autocracy, due to many problems throwing the party in to crisis, with their efforts to influence the proletariat to revolt against the Tsar proved to be failed attempts. In order to come out with a fair and balanced conclusion, it is necessary to look at the opinions of historians from both ends of the spectrum: from the sympathetic Soviet historians, to the more critical opinions of the Western historians, and then lastly looking at the more balanced and neutral views of revisionist historians. Soviet historians hold the view that the period ranging from 1905 to 1914 was chosen by the Bolsheviks as a time to reorganise and strengthen their party, keeping in mind that the oppressive character of the Tsarist system caused too many obstacles for them, thus making it nearly impossible for them to make much progress in achieving there goals. Along with this, this body of historian also hold the Mensheviks responsible for lack of success, arguing that their awkwardness and co-operation with the bourgeoisie was undermining key Bolshevik beliefs, inadvertently destroying any opportunity the Bolsheviks may have had to create an alliance with the working classes and peasantry. ...read more.

Western historians, on the other hand, are quite the contrast in comparison to the Soviets, basing their views on the idea that between 1903 and 1914 many key events took place which Lenin and the Bolsheviks were not a part of. They are, in fact more critical of Lenin's methods and emphasise that it was mostly his fault for the difficulties encountered by the Bolshevik party. The Revolution in 1905 was clearly not under any influence from the Bolsheviks as Lenin had spent most of his time exiled in Geneva, Switzerland, along with many key Bolshevik officials in hiding from the Okhrana meaning he was therefore not able to lead his party in efforts to stir up revolution. In fact, the only reason revolution occurred in 1905 was due to the strikes and uprisings by the workers, peasants and soldiers who were organised by themselves and mostly under no influence from any external party at all. This, and the fact that the Mensheviks were involved in the 1905 uprisings, was clear evidence that revolution was capable without any efforts from the Bolsheviks at the time, regardless of whether it had been successful or not. Western views feel that this provides evidence of how Lenin was a power-hungry leader, and this brought many problems to the Bolsheviks, highlighting the flaws in the system of 'democratic centralism' used by the Bolsheviks, which was essentially a dictatorship led by Lenin. ...read more.

There was popular discontent in 1912-14 and Lenin makes some of their desires known but Bolsheviks are not instigators or leaders: they were a group that followed. The basic belief of the Revisionists is that even though Lenin did make mistakes, he learnt from them and that there are also hurdles like the Okhrana and the autocracy that were standing in the way of a revolution. Analysis of the different schools of historians make it obvious that opinions differ on why the Bolsheviks were unsuccessful in achieving their goals by 1914. However, it is clear that there are several reasons that stand out as key in answering the question put forward. Firstly, the Bolsheviks faced the problem of the Okhrana and the autocracy, as this meant that there was always a threat from the secret police and therefore a small party was the only solution. Secondly, Lenin was partly to blame as he played hardly any role in the revolution of 1905 and also he failed to realise the potential of the Dumas. His ideology would not help him either as he constantly changed it in order to adapt and fit in with his surroundings. Finally, the Mensheviks were also a key obstacle as their larger party and co-operation with their bourgeoisie meant they were undermining key Bolshevik beliefs, thus destroying any opportunity the Bolsheviks may have had to create an alliance with the lower classes. ...read more.