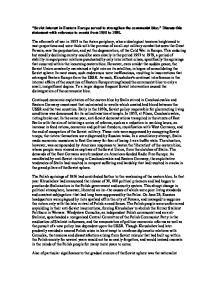 Soviet interest in Eastern Europe served to strengthen the communist bloc.' Discuss this statement with reference to events from 1950 to 1980

"Soviet interest in Eastern Europe served to strengthen the communist bloc." Discuss this statement with reference to events from 1950 to 1980. The aftermath of war in 1953 in the Asian periphery, where ideological tensions heightened to vast proportions and were thick with the promise of an all-out military combat between the Great Powers, saw the perpetuation, and yet the degeneration, of the Cold War in Europe. This enduring but steadily declining enmity could be seen clearly in the period 1953 to 1979, a period of stability in superpower relations punctuated by only intermittent crises, specifically the uprisings that occurred within the loosening eastern bloc. However, even amidst the sudden peace, the Soviet Union constantly maintained a tight rein on its satellites, in hopes of consolidating the Soviet sphere. In most cases, such endeavours were inefficacious, resulting in insurrections that estranged Eastern Europe from the USSR. As such, Khrushchev's continual interference in the internal affairs of the countries of Eastern Europe strengthened the communist bloc to only a small, insignificant degree. To a larger degree frequent Soviet intervention caused the disintegration of the communist bloc. Continued economic exploitation of the eastern bloc by Stalin stirred in Czechoslovakia and Eastern Germany resentment that culminated in revolts which created bad blood between the USSR and the two countries. ...read more.

From November 4 to November 11, there was bitter street fighting as the 200, 000 strong Red Army equipped with 4000 Russian tanks crushed the rebels and overthrew the Nagy government. The prime minister was captured and executed, and replaced by Janos Kadar, and Hungary came under strict Russian control again. In view of the above, Soviet intervention in Hungarian independence efforts had left an eternity of deep-rooted antipathy and resentment within the country, which served to inflict tremendous strains on Soviet-Hungarian ties. The weakening of the eastern bloc was also contributed to by the events from 1958 to 1961, most of which were dictated by the Soviets. During the period after the sporadic uprisings in Poland and Hungary, Khrushchev had established himself well as the successor of Stalin and had decided, by means of a series of aggressive actions, to keep the satellite countries of the Soviet Union on a tight leash. The Rapacki Plan of 1958, for example, proposed a reduction in the armed forces of Germany, Poland, and Czechoslovakia. Consequently, the revolutionary potential of these countries would be severely undermined and, in the event of a Soviet invasion, the people would be unable to put up an effective resistance against enemy troops. ...read more.

This is transparent from the many uprisings within the Soviet sphere itself, as well as the fact that the USSR was mostly impervious to the entreaties of her satellite nations. The insurrections that had transpired within the communist bloc were spontaneous, arising from the intrinsically draconian rule of the Soviets. Collectivisation attempts had proven economically detrimental and, worst of all, had enfeebled the East European people, who were perpetually haunted by spectre of famine. The absence of the rudimentary freedoms to which all humans are entitled, in particular the freedom of expression, has deprived the people of the chance to verbalise their dissatisfactions, which accumulated over the years until they culminated in local uprisings. For these reasons and several others, there was already a hatred for Soviet misrule within the communist bloc. This hatred, however, was heightened with Soviet military intervention in local affairs, which more often than not had left an indelible mark on the people of East Europe. In reinforcement of my stand is the eventuall fall of communism in 1991, which goes to show that, irrespective of how Soviet misrule was occasionally beneficial to the strength of communists, communism was doomed to fall in the first place. ...read more.